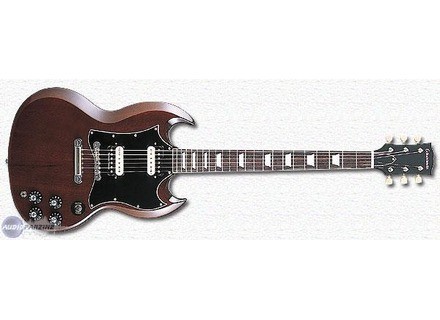 View other reviews for this product:
Edwards is a japanese brand which is an offshoot of ESP guitars, just like LTD. But unlike LTD Edwards has its own guitar models. Most of these models are based off of popular designs. They are exact copies of known popular designs. They can do this because technically they are a Japan only company. People have been importing these guitars for a couple years now because their quality is top notch and their prices are very good for what you get. This is one of their SG models. This is a copy of an SG standard. To be nerdy about it, it would probably a 70s SG standard copy due to the large style pickguard and the witch hat style knobs. The specs are pretty standard. It has a mahogany body and neck with a 22 fret rosewood fretboard with trapezoid inlays. From the factory it comes with Seymour Duncans which is great. It has a set that Edwards likes to use. It has an SH1 59 in the neck and an SH4 JB in the bridge It has standard Gibson style controls, with a tone and volume control for each pickup and a 3 way switch. It has a standard Tune-o-matic bridge and stop tail piece.

These guitars play just like their Gibson counterparts and it is well. The SG was designed to replace and fix many mistakes with the Les Paul. The SG was designed in such a way to give better fret access than the earlier Les Paul. The neck is not mounted as deep into the body as is with the Les Paul. With the neck mounted so far out on the body and the body being so thin and light, SG's are prone to neck dive. When playing an SG standing up you may find yourself holding up the neck due to this awkward balance between the neck and the body. This can be fixed by moving the strap peg.

These guitars sound better than their Gibson counterparts because of the aftermarket pickups that they come with from the factory. The JB in the bridge and the 59 in the neck is a classic Seymour Duncan set. The 59 has a great PAF style tone. It has a good amount of sag and the mids are nice and pronounced. The JB in the bridge is the jack of all traits and can be used for just about anything. You can get great overdriven tones all the way to searing high gain with it. Lots of people use the JB for metal and whatnot so it can handle whatever you want. If you want the heaviest high gain pickups you will have to go active anyway. These are great passive pickups that can do just about any type of music out of the box.

These guitars sell for about 800-1000 dollars. At this price it may not sound like much of a bargain over a new Gibson SG standard which is about 1100 dollars. Once you factor in the aftermarket pickups it makes slightly more sense. Even still the value on this guitar isnt as good as other Edwards models. Les Paul Customs or 1100 bucks compared to like 2500 for a Gibson is good. This is not so good. Plus you will have to pay to have it shipped over from Japan. If you are looking for an SG Standard you can probably get a good deal on a Gibson version they are pretty common and the prices on them are very fair.
Did you find this review helpful?yesno
Cookies help us improve performance, enhance user experience and deliver our services. By using our services, you agree to our use of cookies. Find out more.