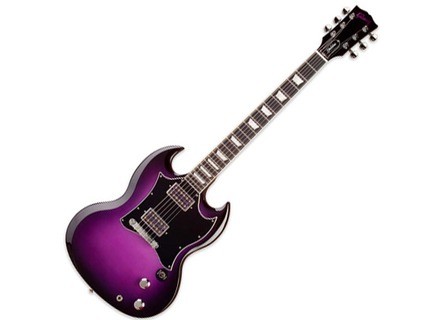 SG Goddess, SG-Shaped Guitar from Gibson in the SG series.

View other reviews for this product:
The Gibson SG is such a fun guitar just by it's cosmetic look alone. I love the way this guitar looks because it is so angry looking in pissed off and that's exactly the kind of music I like to listen to you. This is a tiny tar it just reminds you the hard rock days and the great music that artist used to make. This is the guitar if you've ever heard any AC/DC album mean you heard this guitar in use with a Marshall amplifier of some kind. This is a great guitar if you like a good warm guitar but a very focused tone. This is a guitar that was very influenced from the Gibson Les Paul guitar because it takes very much is the overall body shape of the Gibson Les Paul .


I love the tone of this guitar when recording for any recording session. This is a great focused tone that is very warm and direct so it makes for such great tones when I record. The mahogany body and mahogany neck combined with the rose wood fretboard is such a great tonal match. It matches very well with pretty much any amplifier that you use. If you use a fender clean amp than this guitar your tones and separate them much better than a Gibson Les Paul wood. If using Marshall are high gain amplifier somewhat or some sort and this is a great guitar for that as well.


I highly recommend this guitar is anyone looking for one of the best sounding and best looking guitars out there. You can find them on the use market and classified markets very easily because they're very common and very easy to find. I seen these guitars go for right around $1000 on the use market and that was during high times for used gear. So I'm not sure exactly what they are in this market with this economy but you can find them pretty easily. I highly recommend this anyone looking for a good Gibson Les Paul tone and with a little bit more focused in Center direct tone.
Did you find this review helpful?yesno
Cookies help us improve performance, enhance user experience and deliver our services. By using our services, you agree to our use of cookies. Find out more.