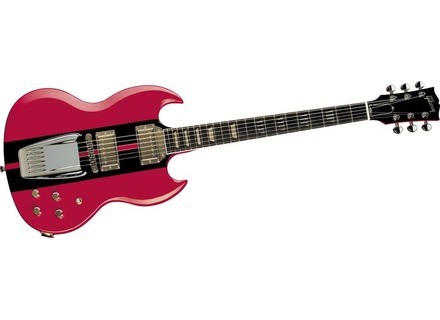 SG GT, SG-Shaped Guitar from Gibson in the SG series.

« Some nice features but its ugly »
1

View other reviews for this product:
When this guitar came out everyone said "WHY." This guitar is pretty silly looking on the surface. It is supposed to be an SG with a hot rod car motif. Im not sure why Gibson would even bother doing something like this. Its a guitar not a car. This guitar does have some good features that Gibson should have carried over to their other guitars but didnt. With this guitar you get a mahogany body and a set mahogany neck. You get an ebony fretboard which is nice for a non SG custom. The neck is an early 60s thin profile. The neck also has a special truss rod so it is extra strong. Up top you get locking Grovers for once. The cable jack has a locking system on it like a microphone which is pretty cool. The stoptail has a stupid metal cover to make it look like a car or something. This can be removed but it is dumb to have in the first place. The volume and tone pots on this guitar a improved over what you get in most Gibsons.

The big giant stop tail cover is pretty silly. It can be removed but it shouldnt have been there in the first place. The bolts for it go all the way through the guitar so even if you remove it you still are reminded that it was there. The neck is pretty nice and feels alot like a SG Custom neck. They do not make many ebony fretboard SG's outside of the SG custom so that is one plus on this guitar. The upper fret access is pretty good because of the SG shape. It was designed to give good upper fret access. The rediculous tailpeice cover does help balance out the natural neck dive of the guitar. The jack lock is pretty cool. I dont know why they would put it on this rediculous guitar and not their other guitars. Its something that some guitars need but it is not a problem if you use a wireless system or just wrap your cord through your strap.

The tone on this guitar is pretty good. It sounds like every other SG pretty much. Most of my problems with this guitar are with the unusual car motif. These guitars have a unique sound of their own. They have a different sound than a Les Paul due to the different style of body. Some people say it sounds more like a Gibson Flying V than a Les Paul. The smaller body also helps make the tone different than that of a Les Paul. Gibson pickups are mainly designed for classic rock. These pickups tend to offer a medium output. The pickups have an open sound. They are not super tight but provide a good amount of sag for more traditional tones. If you are looking to play heavier music you may want to replace the pickups with aftermarket higher output models.

This is another pointless model by Gibson. I dont know who thought this guitar would sell well or be a good idea. Gibson should stick to making guitars not gimmicks. Anyone who knows guitars can look back in history and think of a bunch of stupid guitars like this that did not sell well at all because they were ill concieved. Its not like this guitar is ahead of its time or anything, it is just a stupid guitar. I hope there isnt a time when a guitar like this in fashion because it would probably make me sick if everyone wanted stupid guitars like this. If you want an SG get a real SG. If you want a toy car then get a toy car. You dont have to combine everything you like into one think because that just makes both things equally useless.
Did you find this review helpful?yesno
Cookies help us improve performance, enhance user experience and deliver our services. By using our services, you agree to our use of cookies. Find out more.