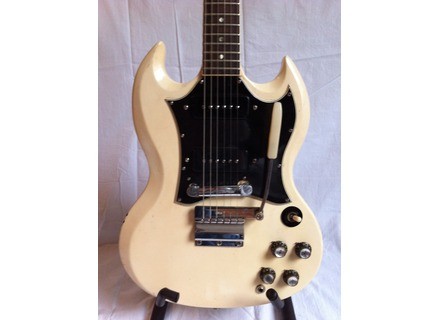 SG Special (1968), SG-Shaped Guitar from Gibson in the SG series.

View other reviews for this product:
This is an american electric guitar, one of many SG models designed by Gibson. It's got 2 soapbar pickups, four knobs (two each for volume and tone, controlling either pickup). It also has a mahogany body, a standard feature of Gibson guitars from this era. It also has a tremolo bridge with the tremolo bar, though this isn't quite up to the standards that Floyd Rose would later reach. It's got a mahogany neck and an ebony fretboard. There is a pickup selector switch below the strings.

This guitar is a breeze to play. This one of many reasons why people choose these as some of their first guitars. Getting a good sound out of this guitar depends a lot on the amp you use, which is one of the reasons why it's not necessarily my favorite. The shape is lighter than that of its inspiration, the Les Paul. It's also a lot easier to play. The drivers on my guitar are definitely stable.

I like to use this Guitar primarily with my Marshall combo. This is one of the few guitars that sounds best with that amp. I think this may be the ideal combination for both of these instruments, since it was apparently the preferred choice of Pete Townshend for many years. That's actually a good reference point for the sound, as his enormous sounding rock tones are relatively well emulated with this setup. I would recommend this guitar to those who play hard rock or punk, basically where the majority of the tones used are distorted. You'll be happy with this guitar if that's how you play. I wasn't as crazy about this guitar when I plugged it into a tube amp, since its clean tone leaves a lot of character to be desired. Even with the Marshall, the clean tone is somewhat bland. This is definitely a guitar tailor-made for rocking out. That being said, it's not exactly my cup of tea, as I prefer to play with clean tones quite often.

I can't say I prefer this to the Les Paul, hands down my favorite Gibson guitar. After reading up on it, I discovered that it was made to be a cheaper version of that instrument. However, this guitar is definitely one of the better SGs made, and as such, it will be better than some of the lesser quality Les Pauls you can find (especially the Les Pauls not made by Gibson). It's also almost guaranteed to be cheaper, which is always good. This is a classic guitar, and while it might not be ideal for my taste all the time, there are plenty of satisfied customers out there. This guitar is definitely worth checking out.
Did you find this review helpful?yesno