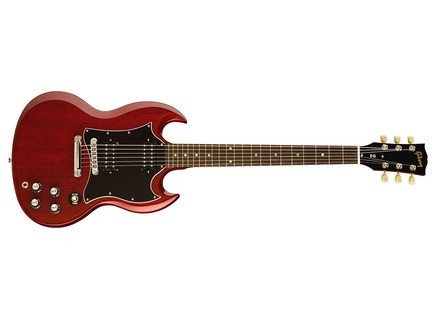 SG Special, SG-Shaped Guitar from Gibson in the SG series.

View other reviews for this product:
I have a 1992 model, with ebony fingerboard. For the rest I think the features have not changed: it's simple and effective.
Aesthetics, it is far from the refined finish of a standard, but it acquires a certain charm with the patina of time. And then it did for rock, not fashion!

This guitar is a joy to play. Lightweight (although heavier than a standard hair), ergonomic and balanced, there's really nothing to complain about except its relative fragility (it's a gibson, beatings do not forgive) and the questionable quality of its mechanical become a little less accurate after changing strings. Fortunately, once granted, it is, and very well. Special mention to the quality of the wood and the violin: my setting has not changed for at least 10 years!
As for the handle, I find it absolutely fantastic. Very large, very flat, with its ebony fingerboard that provides a touch nervous and precise, it is largely thanks to him that I consider this guitar to be by far the best I've ever played on all ranges price combined.

The SG has a very special type, and do not take it for a cheap standard, because it is an instrument that has a personality of its own. Compared to other Gibson, it sounds much drier, sharper, with a grain a bit "dirty" so hot, but appropriate for both blues solos psyche as rhythmic punk. Of course, it is wise to also possess a stratum for flights hendrixiennes or sound ultra-clean to Pink Floyd, but, overall, is a guitar who can be versatile with a strong character, which is quite rare to be stressed.

It hurts because I love this guitar, but I have to be mean on the overall score, because Mr. Gibson and importer do not care about us and it starts to do well. Since I bought this guitar, its price almost doubled, which is already a scandal in itself, but it has increasingly lost its divine ebony fingerboard (which was a large part of its charm and personality) and height of meanness when we know the fragility of this type of instrument, its hard case. In the end, I think it's now better to turn to the second hand market, and then maybe buy a Voodoo and change the pickups, but it puts us almost at the cost of a standard. But I think it will still have to organize a one day boycott to bring the great Gibson at a reasonable price