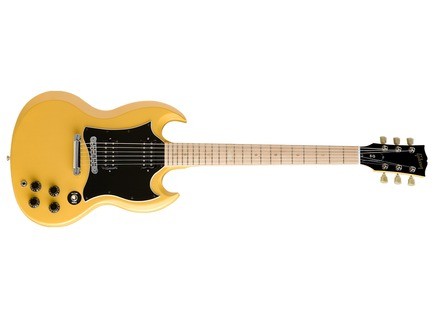 View other reviews for this product:
Gibson now has a seemingly standard series called the Raw Power series now. These guitars are made from all maple to give a unique and bright tone. This is the the Raw Power SG guitar. The one I tested had the natural Satin finish and it is super mapley. The natural version has a strange clear pickguard. You can see the routing on the SG through it. I guess this is Gibson showing off the cheap route they developed in the mid 60s that caused them to switch to the large pickguard SG guitars over the original small pickguard design. You get the standard SG shape with a maple body and a maple neck with a maple fretboard. Maple everywhere. The fretboard has 22 frets and white inlays that easily get lost in the maple fretboard. To keep up with the cost cutting it has a standard black headstock that matches nothing on the guitar. You get a set of Classic 57 humbuckers thankfully with the standard Gibson control layout.

This guitar plays a little better than your typical boat neck SG which isnt saying much. This is mostly due to the lack of excessive finish on the guitar. With the baseball bat neck it really fills your hand and then some. If you have small hands you may have trouble playing this guitar. As I said the dot lightly colored dot inlays get lost in the maple fretboard. After 5 minutes you are glad you can barely see the inlays because thats when you notice the inlay on the 12th fret is completely different than the rest. They threw in a trapezoid inlay in the middle of all the dots to change it up I guess.

This is the Gibson for people who hate the tone of a Gibson. With the maple body maple neck and maple fretboard this guitar does not sound anything like any other Gibson you have played. Even the great 57 Classic pickups cant make this guitar sound like a Gibson. It not sounding like a Gibson doesnt mean it sounds bad. It is pretty bright and this gives the tone great clarity. I just dont know what Gibson player was wanting this guitar. If they wanted a guitar that sounded like this they wouldnt have been playing Gibsons to begin with. If you are playing it low tunings this could be a great guitar to retain clairty. A set of Seymour Duncan Blackouts would really even out the tone. A set of EMG's might be too bright for this guitar.

Im surprised Gibson is still making these. They have made so much good stuff in limited runs and you get stuff like this and the Zoot Suit SG that really have no place in Gibsons lineup for any lenght of time. If you are downtuning or dont like the typical Gibson dont but still want a Gibson I guess this is the guitar they are making for you.
Did you find this review helpful?yesno
Cookies help us improve performance, enhance user experience and deliver our services. By using our services, you agree to our use of cookies. Find out more.