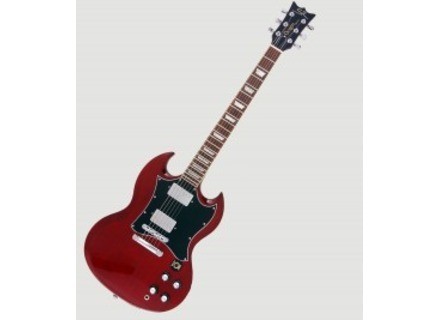 View other reviews for this product:
In which country was it made? (USA, Japan, Mexico, France ...) Made in Korea How many frets, what kind of microphone and their configuration? 22 frets, short scale to handle, HH pickups that can Splitter What type of bridge (Floyd, Wilkinson ...)? Chelavet tune-o-matic What are the settings (volume, tone, micro switch ...)? Independent volume and tone for each pickup 3-way selector usual. Finish: To compare I got a gibson sg there ten years. I told myself "never gibson. Although it does not sound too bad but the finish was horrible. This guitar is really SR very well. The color of mine is a little darker than the pictures, the color changes dramatically depending on the light. But I really do not have a problem. It came perfectly set, no imperfections.

A short scale to handle the profile says "end," everything is relative, not a hose ibanez rg, but I was surprised to find it so enjoyable. Ergonomics at all is really good. It is very enjoyable to play. If you want to find fault they will say she has a head that falls a bit if you have a strap that is really slippery on the shoulder (as finally all sg). I tried to put a stralock that I had another guitar and it did not go with the original screws, so I invested in a strap with a locking system integrated and there the problem of balance n longer exists and the strap passage is not likely from the strap. I&#39;m not solo so access to acute I do not know much, but a priori, the little that I could try, so good. The knobs are really progressive, all is well situated for comfortable use. The mechanical fit perfectly. In short nothing really to say! One feels immediately at ease with this guitar.

I play mostly metal. The original pickups (which I keep permanently) missed a bit of volume output for some, but nowadays the amps have such reservations that gain enough to go one-tenth the gain of the amplifier and it&#39;s good. Instead I found that finally have a microphone of this type is much nicer than my example superdistortion on my other guitars, it allows better management of the gain by playing the volume knob. The neck pickup sounds superbly clean sound. Very round, it gives body to the sound. The bridge pickup, I use it mostly in disto is where I prefer it. He did very well out the harmonics and subtleties. Unlike some microphones at the highest level it makes no distortion in itself but will attack a fine amp. And just down the volume to be left with a softer sound. Where on a lot of guitars you have a volume knob that will act only on the first half of the race here was a gradual evolution to the end. (But let&#39;s be clear until the end: when I compare it to mikes really overfed output, it sends is already very well) I do not worry me greatly to have to sustain indefinitely, I n &#39;I never understood all these stories (the worst is that most who speak of will never leave their notes sounded like the 90% of youtube videos where you can not hear or the sound of the amp or that of only the guitar but an avalanche of notes). Anyway for those interested there, sustain, enough to sound a note, you go make a coffee and come back to listen to the notes still resonate. But where it has a sacred interest is that even when plucked harmonics is pressed too will ring with your thumb. Somehow the guitar will catch a few small errors of game This is not a guitar that plays the sound card or aggression which we will wait his clinic. Later, the Configurator SR guitars will always one who wants to put more original pickups ... But honestly even if you&#39;re a monomaniac of Marduk mics you go home for a bit than you expect her brutal you plugging directly into a clean Fender amp.

I&#39;ve had two weeks and it&#39;s a real pleasure to take to play. I wanted a short scale guitar, and two humbuckers with separate volumes but not as lousy a gibson (a brand that continues to disappoint me in their recent models). The sound suits me perfectly. The value for money is incredible. I am absolutely certain that if we put the logo of a brand known more people would be prepared to double or triple. I have not tested other than mine, but given the seriousness of it I guess the others are the same level. I thought I read somewhere that it was perfect for beginners, it&#39;s been 15 years since I played and I do not feel at all with a beginner guitar. (What are we there can, we can not prevent certain not to judge things by their prestige and their advertising price ...) What is not without adding to the attractiveness of this guitar and this brand is part of a configurator that allows to make his guitar by his taste for the site and the availability of SR that responds quickly to emails and is very friendly (we do not end up with an anonymous employee who Who cares, quite the contrary!)
See the source
Did you find this review helpful?yesno
Cookies help us improve performance, enhance user experience and deliver our services. By using our services, you agree to our use of cookies. Find out more.