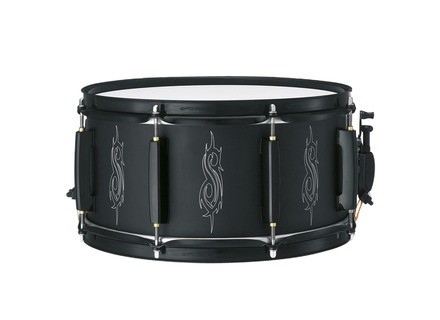 View other reviews for this product:
The Pearl Joey Jordison JJ-1355 Features:

I was offered this snare in a trade for a vintage Zildjian Avedis 19" Ride, and I'm glad I took the offer! I was very much hesitant about it being a Slipknot snare, since I don't really want to be associated with Slipknot, or being a "maggot" as they call their fans. Don't get me wrong, I like a few of their songs, but people seem to look down on their die-hard fans, and most of the people that seem to buy this snare, are die-hard fans. Well, I took the plunge, and this really is a great sounding snare (I just wish it didn't have the giant Slipknot S's on it)!

This snare really excels at a higher tuning and sounds like a timbale without the snare wires engaged. With the snares on, this snare really packs a punch! I've tried steel snares before, and they just haven't done it for me. While they sound okay, there's just a certain quality to them that makes them sound cheap to me, this snare doesn't sound cheap at all!

With a drum dial, I tune this snare to 80 on the bottom, 90 on the top with the original head on the bottom and a Remo Ambassador on the top. The tone is punchy with a huge, quick attack. This snare is a bit ringy, but not in the sense that I've used on other snare drums, where it's annoying, the ring on this snare is highly desirable, especially when hitting close to the rim of the head, and on rimshots. This snare is LOUD and will slice through a mix with ease.

Clearly, it was made for heavier music with an artist like Joey Jordison of Slipknot endorsing it, but it is much more versatile than I've heard it given credit. Tuned low or medium, this snare can get a nice full sound to it. My only complaint is that, while it is very cutting, I find it still lacks a certain "woody" feel that I'm used to with my maple 14x5" snare, and seems to lack a lot of bottom end (at least when tuned high), so mostly only extreme highs cut through, which makes the snare sound a bit one-dimensional.

Either way, I would recommend this to a drummer who's playing heavier music and uses double bass. The 13" size of the drum allows you to more easily play double bass, as your legs aren't riding right up against the snare. The extra inch really does make a difference! I wish this snare had a bit more body to it, but it's one of the few snares that has that awesome ring to it that I've played. I recently sold this snare to try out a similar sized maple snare (Mapex Black Panther), and am waiting on it to get here. Hopefully it fixes my complaints about the Joey Jordison snare!

For the price you can pick these up on the used market for, they're hard to beat! Tuned high, this is an EXCELLENT snare for anything that uses blast beats, or requires a powerful pinginess!