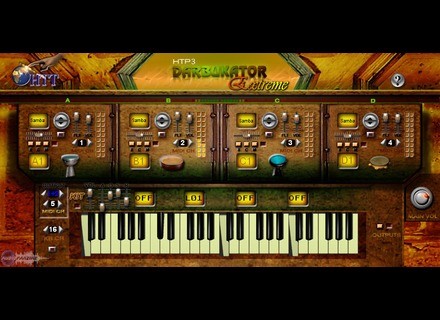 Also, the prices of HTP1 Darbukator Maksoom and HTP2 Darbukator Oriental Beats have been reduced to $79 and $89 respectively (they were $150 each).

* True 24-bit samples.
* Covered instruments are Doholla- Doff- Darbuka- Riq.
* Every hit sampled in 2 to 6 hand positions with up to 12 layers.
* All samples are recorded with the same instruments used for the styles.
* New unconventional sounds like finger nails.
* Envelope control for different playing techniques.
* Compatible with all Darbukator series.

* Modern and traditional styles by top players.
* WAV, REX, Refill, EXS and Sound Fonts.
* Doholla, Doff, Darbuka and Riq.
* More than 800 MB in various formats.
* All the loops (except WAV format) follow the songs tempo.
* WAV loops recorded in 4 tempos.
* Every slice programmed with its own sustain and release.
* MIDI files included for EXS and SF2 loops.