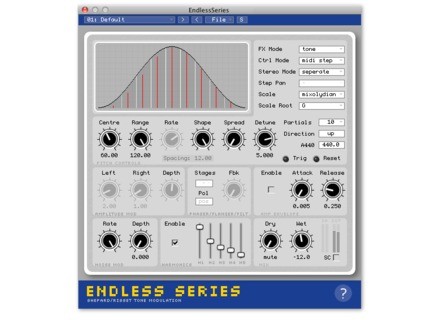 Oli Larkin has announced the release of version 3.0 of the Endless Series, completely rewritten in C++ and no longer requiring the Pluggo runtime.

The functionality of the four version 2 plugins is now all in one plugin.

Endless Series is a synthesis and effect plugin based on the Shepard Tone auditory illusion. It is designed to generate "mind bending infinite scales, psychedelic drones and fascinating sonic textures," according to the company, and works as a tone generator, a ring modulator, phaser, flanger or resonant filter bank effect.