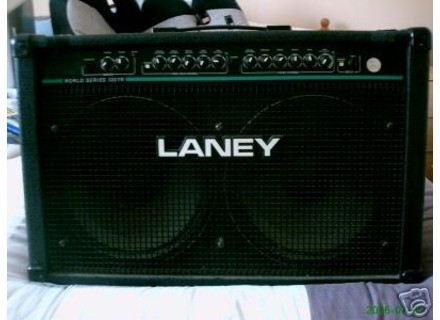 It has a combo beginners transistors 90, which dlivre 100W through 2 HP 12 "H & H
intgr stereo chorus reverb, jack facade, and a second to play with a friend who had forgotten his gear, this fesant, then everyone plays at his HP and we each have a clean channel, on which we can put a distortion pedal to have for its two channels even when ... ide coronation. roughly divides the amp has 2 combos, each with its clean panel rglage acute / medium rather / bass / presence
2 floors of power, a clean and a crunch
The cool thing is that all the knobs of acute rglage / medium rather / bass / presence are push / pull, and it adds a double dose of each
footswitch connects the facade and also enables reverb / chorus / channel in a jiffy

The configuration is very simple, when the coup has integrated push button / pull
the clean sound is excellent in the sense that projects the sound this amp with no saturation, which one of my silent when buying impracticable for him to add a multieffect him deal of distortion and effects " gadget

It has really suited my musical style, he was so very violent volume level, distortion and cashed the most "hairy" without flinching or cause snoring low, and yet I've made him eat kilos ...

I am however more nuanced regarding the crunch channel, not very convincing up, rather "horsehair horsehair" even if we could engage the boost, which enabled switch to "high gain" which ignores equivalent to a fat distortion, without personality, but mostly very loud noise level of all kinds ...

I put a crunch channel 8 because this is really mean, but I had not bought for has not only the clean channel has a high volume m'intressait the era.

I availing oneself of the past 13 years, and I had bought second hand, but I put in forced rest due to the noise power, it still works but I can not force more as I could before, I would change the parts in time for gr Hoping to find him his first days as a ...
this was my first real amp, heavy, powerful, robust, I had purchased 2,500 francs (a good part of my first pay to pass silent ...) but I have never regretted this purchase and for this reason, I put a 10 (nostalgie. ..)
See the source
Did you find this review helpful?yesno
Cookies help us improve performance, enhance user experience and deliver our services. By using our services, you agree to our use of cookies. Find out more.