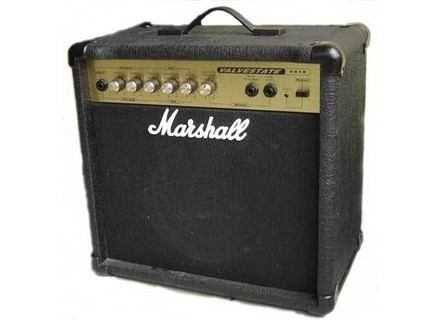 VS15, Solid-State Combo Guitar Amp from Marshall in the ValveState II series.

View other reviews for this product:
These amps pretty much sound like crap. They have a preamp tube and no power tubes. So the back end section which is the power section is still solid state. This means that they went a cheap way of getting you a "tube amp" and no real change in tone. Most of the feel and tone of a tube amp comes from the power section.

These amps cam in different formats with wattage and different size combos, but note of them sounded worth playing in front of people with. They have a tube voicing but the overall feel and the most important thing, well it just doesn't feel like a tube amp.

Marshall sound their best with a Gibson guitar. Whether that be a Gibson Les Paul or an SG these amps just come to life when a Gibson is played through one of them. It appears that th two companies though on two different continents voiced their respective instruments according to one another.

I also like the way a Fender Stratocster sounds through this amp. Even though it is solid state it does have a decent enough tone for practicing at home or in an office. This isn't an amp I would ever take on stage but it will do behind the scenes.

These amps have been fizzled out of production. So the used market is the only way to go at this point. I would suggest getting an all tube amp instead of this thing. There are plenty of all tube amps out there and even some Marshall's that will cost about the same as this amp is used. I would recommend Marshall JCm 2000 DSL 100 or a PEavey 5150 over this amp any day. You can go along way for about $500 if you look hard and study up on some proper gear.
Did you find this review helpful?yesno