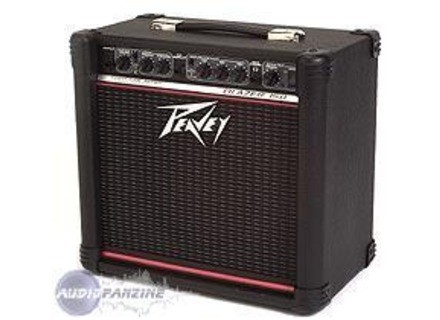 View other reviews for this product:
The Peavey Blazer 158 is a cheaper beginner's version of the ever popular Champ amps. This one is actually under the Squire name, which is of course owned by Fender. The big difference between this amp and the real Peavey Blazer is that this one isn't a tube amp but is solid state. It's still 15 watts of power and has a single speaker, which I think is 8" but I'm not 100% sure on this. It's got a single 1/4" input on the front and also a 1/4" headphone output.

The make up of the Peavey Blazer 158 is quite simple to understand and follow. If you've ever used an amplifier before, you'll probably have this one under control. The parameters included on the front panel include knobs for gain one and gain two, volume, and then treble, middle, and bass EQ control. That should be self explanatory for all users, so I don't think a manual is a necessity.

The sound of the Peavey Blazer 158 is a bit uninspiring, as I honestly would not record with this on the level that I'm at right now. It comes off a bit tinny and isn't very full sounding because of the small single speaker and the fact that it's not a tube amp. This is certainly not a replacement for the true Fender Champ, but will be fine for a beginner looking for a small amp to practice with at home.

While okay for practicing and for beginners, the Peavey Blazer 158 isn't a serious guitar amplifier. If you were to hoping to save a few dollars with this instead of a silver face Fender Champ, I would highly recommend against it. This amp simply isn't in the same ballpark. It's okay for the price and for practicing, but beyond this I wouldn't use it. Great buy!