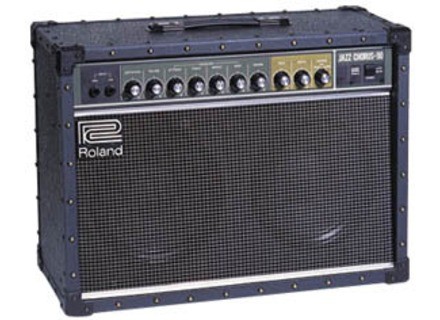 What is the power dlivre?
2x40W or 2x45w, or perhaps a 80 or 90 W total on paper but much more powerful the ear, you cover a drummer, even nerv (I mean cover, not just powerful enough to play with a drummer, tried and tested: drums in the background ...)

What connection?
Trs connector end 70 80 beginners, no MIDI, no modlisations: hi and low input, a send / return stro, jacks for pedals on / off effects (reverb, chorus / tremolo and distortion), an output Stereo out (without modlisation hp) and a headphone output.

What rglages the effects? ...
Spring Reverb trs well (for a reverb combo course)
Chorus exceptional (either using the "only" preset that Roland has put on this combo (fixed) trs good to be living on a traditional Rate and Depth to make his own way)
Disto (it is, but act as if there were not any Manir achte is not an AD for its distortion has to be, was not even an illusion light crunch). The JC is the amp (I want to say "of references," at least mine) for its clean.
Rglages other standards, if not a 4-band EQ, instead of the traditional trio Low-Mid-Treble there is also a Hi-Treble, was used to carve a little over the top of prcisemment spectrum.

The configuration is it simple?
Configuring simple, even beginners can a rgler a JC.

Do you get a good sound easy?
Apart from the distortion (which I RPET, should not even have a say), I think it&#39;s difficult to have a bad sound but looking really really good, kind rglages reverb and chorus rate and depth of background and playing false purpose.

The manual is clear and sufficient? ...
I do not remember having opened dj, I must have it in a corner at home

- Is it your style of music?
I think it is all styles of music o you need (even in sporadic Manir) clear sound, this is probably not the amp acqurir in a priori Trash (still might need to be an experiment with pedals dedicates music acts).

- What kind of sound you get and with what rglages ("crystalline", "bold ",....)? What are the sounds you prfrez, you dtest?
Sounds clear (at the risk of rpter ...).
Curious but gives the impression of playing in Hi-Fi
INTERESTED particularity (and binding that wants to spend his inapperus breads), it has a lot of momentum, so that sounds the least powerful of his game-emphasized its not as much as the others but when m me-so it must ncessairement play clean, no approximation ...

- What is the particular feature you like best and least?
The +: Printing HiFI ie sound and dynamic (I think JC is any evidence of a strong, no more lights, a real tank - I think the studios of rptitions s &#39;are realized, mini servicing, satisfaction guaranteed!)
the - the weight (comes with wheels but for a small combo, a PSE is not dead ...)

- Have you tried many other models before acqurir?
I had a Marshall, Fender&#39;s, I tried some on a gambling den scne or studio, some of them I liked (the fender clean sound of the majority of Fender is very well, shame too typ), the clear sound of most of Marshall has never turned me did the job but not enough to roll over, Mesa- Boogie yes but not always easy to get IMMEDIATE sound we want.

- How do you report qualitprix?
Clear sound as well or better than a JC for a price infrieur a JC, not seen in 20 years (but if you know a o is, let me know ...). Amp trs not expensive for what it is and compared to current prices.

- With the exprience, you do again this choice? ...
Without a single Doubt, Not Even for a split of a second.

NB: I tried the modlisations JC on both outboards Pod on plug ins and they will get there one day may be ... modliser that l (t I sometimes bluff on some of modlisations Amp Pod or plugs, but the it has not, if you want a JC, you must be a significant technology evolution modlisations, just a JC ... A true)
See the source
Did you find this review helpful?yesno
Cookies help us improve performance, enhance user experience and deliver our services. By using our services, you agree to our use of cookies. Find out more.