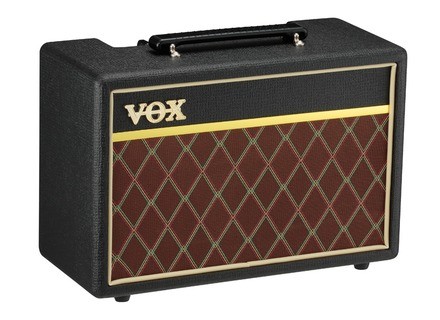 Buy this productView price information >
View other reviews for this product:
Small transistor amp that delivers a little heat from a tube amp.

Came jack, headphone ... 10Watt but sends fine, not possible to mount a substantive, it far exceeds my previous 15w amp.

Of channel, Clean, overdrive, gain, 2 band equalizer and volume (yes) Bass and treble, damages for middle .... A reverb would not have been too much either

The manual is very clear yes with some humorous touches, but anyway, it's not needed!

30 minutes is hacked and we know it by heart, setting its pretty accurate.

It suits me for what I play: From hard rock, blues, rock, rhythm Some ....

The sound is very clear in chalereux crunch rather quickly, perfect for my style. Overdrive in its leaves a bit to be desired, but his pass for the price anyway, but buying a good pedal arises (a fuzz for me). I use an epiphone sg special stroke with 2 humbucker, very bad with a guitar and pedal behringer ultrawah I often use as an equalizater (Nikel for song like Little Wing).

I like the clean bocoup of this amp, it would say that straight out of a good tube amp in good time .... when you push a little gain sound is very good too, rather hendrix but I have a little trouble with the overdrive is not super pretty ... we'll see after buying a noisegate, sa saturates very quickly.

I use it for just 6 months loan.

I had one other amp before, but I play regularly on 4ampli, a Peavey, an XP, a driver, a line 6 ... And this is the best.
Plus it is super nice, good style, not too heavy and it sends fine, damages for absense middle and reverb! (Found on its big brother, pathfinder 15r)

For the price, is not to say it looks great, good guitar, a fuzz and it went off, I would do is choosing without hesitation
See the source
Did you find this review helpful?yesno
Cookies help us improve performance, enhance user experience and deliver our services. By using our services, you agree to our use of cookies. Find out more.