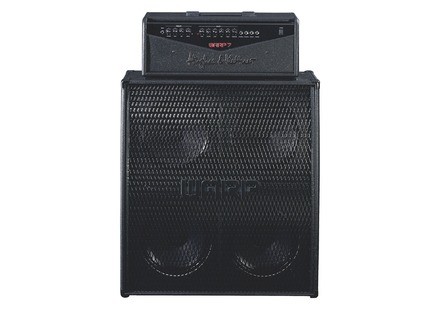 Okay so the config is classic: a clean channel and a distortion channel with three bands + a chaquns adjustable on the presence in saturated (Warp) so no problem priori level rglages.
Now the question do you get a good sound easy, the rponse is certainly not the rglage of different bands is completely inngal, it was almost like some questions knobs could be made optional (bass) , for an amp as bizard be addapt GP style "nag".

For résumé to: degeulasse completely clear sound, cold, without me ... Distortion: while the I understood nothing and yet I spent an hour trying all possible settings, ca drool is rough, there's no dynamic short a big soup koi.
To have a lil comparison j'me branch with the same stuff on Warp7 then a fender 25W amp poor, there's no foto ben h, the poor fender amp is a big slap in the Warp, c ' is that a 100W amp with 4 HP celestion sounds 10 times more crap than a 25W HP with a lil fender. Let's talk about cabinet: it is a shit, it vibrates, it dissonance and all you want.

My scratch using this amp for over a year, attracted by its reputation commertiale "big sound" and its modest cost, however, trs, as the result was deplorable in April, he asked me what I think. Frankly ... go your way, I truly believe that H & K could not care less of the mouth of the world ... ok we have a 100W and a trans Bafle 4 * 12 celestion seuelement for 1100 euros, was not something s'addentre exeptionnel but then .... There's foutage of the mouth.
So for the price There's the way to have an amp that sounds good and much better now nag for the same power. You want to buy it? change your mind ... it's a real crap
See the source
Did you find this review helpful?yesno
Cookies help us improve performance, enhance user experience and deliver our services. By using our services, you agree to our use of cookies. Find out more.