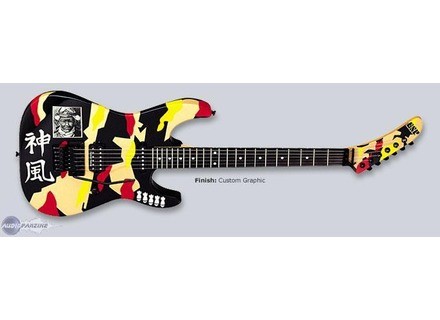 Kamikaze-1, STC-Shaped Guitar from ESP in the George Lynch series.

View other reviews for this product:
Uh ... I do not know or does exactly the guitar factory! (Yes I know my mind starts plutt bad!) But I would say that Japan plutt United States since the ESP gnralement are made in Japan (not?)

The guitar has 22 frets (hou!! Not good!), All on a stick type strat finally I think, as I say I believe, yes I am gone from this young gnrations cons Fender and Gibson for that is the mark of the ancestors, dads! the handle is thick and round plutt I think is a a! (May be that one day I'll change your mind! Who knows! ... No I dbloque it!)

mics: an ESP SS-120 in a serious position and the famous TB-12 in acute position I say famous because it is part of the microphone made by Seymour Duncan George Lynch! The name of the microphone? "Screaming demon" (I'm afraid huuumm !!....)

The rglages? trs simple! is the case to say! there is only one volume knob, and dj in the picture I was looking slecteur and until the grip by the way! I asked the questions! But where is it? And I rjouissait dj IDE as an intermediary (the dialogue) a clever gadget allows the change of micro! no! no no! slecteur is the volume knob, it works by the system of push-pull (which is often used for splittage microphones!) so you'll understand that there are only two positions of micro diffrent! (Bouuu!) and even no split!

I put a nine to just two microphones and two sound DIFFERENT!

The handle gnial! I am a regular plutt sleeves thinner but this one really well! Everything passes the seal of nickel solo riff to fast! Access in acute trs well even if it's a pity 22 boxes!!

The weight ha ... is something else! PSE guitar is a ton! lol no but to say that its appearance is not expected that it is really heavy as a gibson! but it seems that it is a fact that the quality of sound!

The weakness of the guitar? But it's just the head! look a! It looks more like a big foot that something else! (Yes I know there are big potato! But it's your choice! YMMV!)

As against the graphics are really cool! Even if I do not really see the reason for the suicide bomber! yes indeed suicide bombers are the Japanese, George Lynch is amricains, normally it plutt war? Anyway we will not piloguer (to paraphrase the philosophy teacher bonnetin of Colombire!)
I put 9 for potato !!!!!!!!!! lol!

I tried this guitar (yes I am not the Owner '! And see why the end of the review) on an amp lamps and scared because I plutt c' is not my style amps lamps! but the sound is! the micro ESP is doing a lot even if I personally replace it! Finally, why should he still have the guitar!

fats are clear, but especially the micro acute george lynch is terrible! in any distortion sound with ease any harmonic, any effect that I have on my guitars galrais IMMEDIATE sounded on KAMIKAZE! a real treat! not to mention the floyd that does not move and which also is super lightweight handle!

I am unfortunately not Owner 'of this guitar! I especially famous essay for micro TB-12 (and I'm not at all).

In conclusion I would say that any guitarist should try an ESP in his life! It's worth dtour (Julien Courbet) gnrale the quality is impressive on tape in the high-end!

Only real default, the exorbitant price of ESP guitars, I do not believe that there are less than 12,000 francs !!!!! To give you an ide the KAMIKAZE-1 stood at more than 19,000 when I tried it!

I put 9 because unfortunately the rve a price (which last word !!!!!!)
See the source
Did you find this review helpful?yesno
Cookies help us improve performance, enhance user experience and deliver our services. By using our services, you agree to our use of cookies. Find out more.