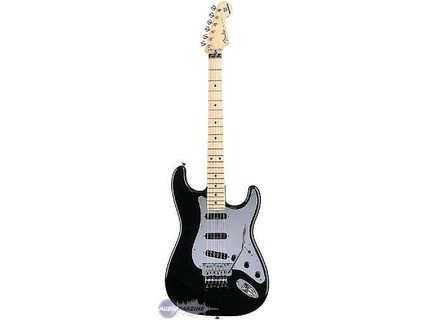 View other reviews for this product:
I walked into my neighborhood Mars music store and saw one hanging on the wall. Seeing as how they want $895 for it (which I guess is fair, but I don't have at the moment) it's still hanging there.

The very first thing that I was delighted with (other than they actually gave one of metal's great bands some recognition)was the fact that a Fender Strat with a Floyd Rose had a maple fretboard!!! I don't know if you've noticed, but try and find a Strat with a maple fretboard and a Floyd. I prefer the maple neck on Strats. It's already got cool high output Seymore Duncan pickups and the mirrored pickguard is undeniably cool.

The only thing I don't like about this guitar is that I don't have one yet. Key word there being yet.

It's a Japanese Strat, so it's not quite as detailed as the USA Strats, but a nice guitar none the less. The one I picked up had a minimum quickie set up but still played very nice. I could tell that with a little tweaking for personal taste, it would be absolutely killer. You couldn't ask for better pickups and with the resessed Floyd Rose you have a weapon to unleash any brand of sonic mayhem you wish.

This guitar kicks ass like the band whose name it bears. I'll have one. Soon.