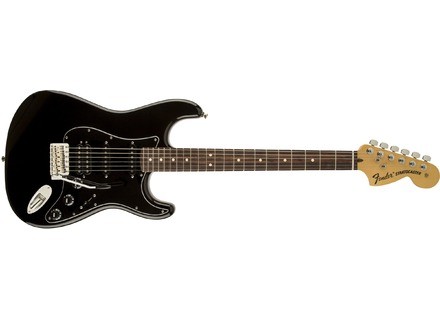 For me it is the handle (almost) perfect. Relatively broad and rather flat behind. Access to the highs is lower than that of a guitar shredder, but still easy. The strings are parallel to the handle even in the high (and I did not pay).
I like the principle of the spring which holds the stem of vibrato in place, but difficult to get it back (at least from below) because the jack blocks. Yet the vibrato was a bit of action back, which would be usable for the metal. Passing is ultra sensitive.
It is also in my opinion the weak point of the beast: it takes patience to switch to open tuning because a single rope tuning exotic means retuning the whole beast. Also I'm not completely sure of the place of understanding.

Its level is quite immediate. Although not a pro sound you pass easily from Hendrix to AC / DC (not necessarily the playground but can do much pretense), and allows some slippage in humbucker sounds a little heavier. The sound is not as focused and defined than a typical metal guitar but it comes out of things quite dynamic.
Overall and quite expected, it is very good Fender sound but displays good versatility because of the configuration microphones. I felt no frustration with the choices on the dial.
on the other hand, we can do better sustain level.
I use it on a Marshall JVM 2000.

After two weeks of use, I can say that I love:
- Versatility
- The shape of the handle (but hey I guess it's matter of taste)
I like a little less sustain, even if it's nothing insurmountable, the balance of the vibrato for open tuning and I reserve my opinion on the holding of agreement.
In any case I think it's a very good mid-range guitar.
See the source
Did you find this review helpful?yesno
Cookies help us improve performance, enhance user experience and deliver our services. By using our services, you agree to our use of cookies. Find out more.