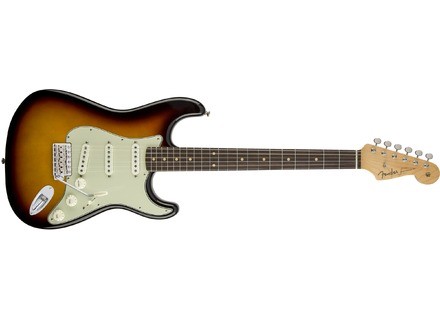 « A precise-sounding, beautiful and nice Stratocaster »

Value For Money : Excellent Audience: Advanced Users
I use this guitar with several amps : a Rivera R55-112 Fifty-five Twelve, a 1990s Laney LC50, and a Carvin Bel Air 212 (three great amps in my opinion). I occasionally play on a Peavey Classic 50. I mostly use the guitar to play blues, rock up to hardrock, jazz-rock, funk, and a little bossa, too.

I was looking for one of the best Fender-made Stratocaster models, one with a very typical sound and particularly comfortable to play. This one suits all my needs.

Everyone knows the Stratocaster so i won’t develop further, and rather try to concentrate on what characterizes this model in particular.

The Vintage Series’ concept is to offer true reproductions of some of the brand’s emblematic instruments from Fender’s landmark years, up to the smallest detail but with subtle evolutions so as to adapt history to modernity. This is how models from this series differ from real reissues.

We are talking about a $2000+ model. It comes with a beautiful G&G brown case with golden corduroy on the inside and Fender-branded golden hardware, a whole lot of nice documents (manual, technical sheet, certificate of authenticity) plus the tremolo arm, a chromed “ashtray” bridge cover, a black leather strap (which looks nice on the pictures but on the pictures only according to me), and two spare parts in small paper bags (I’ll get back to this later).

The case is really beautiful but it hardly stands up, a mere gust of wind and down you go! Totally abnormal.

Now let’s talk about the instrument, as this is what most interests us here. First, the appearance:

The Sonic Blue color (as called at Dupont’s) is very peculiar, depending on the lights it will appear white, sea green or a light blue. It’s very sixties-ish and I love it, but some won’t. It looks even better when the guitar is naturally relic-ed, and clearly the thin nitrocellulose lacquer won’t be an efficient protection for long

Anyway, when you touch it, the feeling is great – even sensual!

The 3-ply pickguard is a tone close to kaki, the dealer I bought it from told me that back then, white pickguards quickly took that kind of tint – a defect linkef with the material used which became a standard in a purely accidental manner.

The pickups, knobs and selector switch tip are in a cream tone, it may seem a bit of a patchwork but it looks beautiful.

A lot is to say about the neck: the rosewood fingerboard was assembled according to the “slab” concept. A little flashback: from its start, Fender had favored local woods to make its instruments, but the growing demand led them to ass rosewood fingerboard instruments to their line, which were more expensive as they required imported woods. For approximately 2 years, the design was as follows: the maple part was made with a plane up side, and the piece of rosewood was glued over it. The main backdraw of such a method was that it implied sculpting the radius into the most expensive wood, which implied a lot of leftovers of the same “noble” material. This is why Fender subsequently imagined a different method which implied sculpting the radius directly on the top part of the maple piece, with the fingerboard reduced to a thin slide of rosewood originally perfectly plane… Using glue and a drill press, the rosewood gets shaped to perfectly adapt to the maple part’s radius – and here you are!

So, a ’59 model features a higher quantity of rosewood compared with a “non-slab” guitar: this can be seen if you observe carefully the side, and even more the middle of the neck.
If you ever were to doubt, the junction line between the fingerboard and maple is a perfect straight line. It’s obvious looking at the headstock as this line is parallel to the nut, but it can also be seen on the other side of the neck, close to the pickguard. But if the junction is slightly curved, then the second technique was used.

The fingerboard of my guitar is pretty, with beautiful wood veins, but it looks a bit light, I prefer them darker. Perhaps the color will densify with aging…
The frets are thinner than what I’m used to, in the same time I’m used to Gibson guitars and I had my 1979 Stratocaster equipped with medium jumbo frets. But in the end, I have no problem with the frets, they suit my playing style. The finish is perfect.

Still regarding the neck, the trussrod’s screw is on the body side, resulting in the (classic-shaped) head to be both simple and sober-looking – only a butterfly string tree for the B and E strings. The nut is beautiful, really worth the look. The nitrocellulose lacquer is very pleasant to touch, and the D profile is perfect for me – really perfect! The neck is very soft and even sensual. I’ll mention two downsides however:
- the inlays are “clay dots”, meaning they’re clay-colored hence difficult to see (especially when playing with your hair in front of your eyes), as they’re barely lighter than the fingerboard! Fender only made these clay dots for a short period of time, I suppose there were complaints they went back to white – like anybody else or so.
- the neck features 21 frets

that’s understandable on a reissue model, but here they could have gone to 22, to me this is the guitar’s only real flaw.

The neck-to-body junction seems very precise to me. The chromed plate features the guitar’s serial number as was the case back in the time, but here it has a V for Vintage followed by the manufacturing year (V12 and so on for mine). There is no big “F” logo on the plate, nor a serial number on the head as Fender stayed true to the 59 standards. There’s not this small hole to adapt the neck-to-body angle either, it may be useful on many guitars but here it wouldn’t bring anything.


Now, let’s talk about its sound and playability:

Either with a strap on on your thigh, the guitar is light and well-balanced. It’s comfortable, the neck is pleasant (yes, I’ve said it before) and easy to play. Unplugged, the guitar’s resonance can be felt and the feelings are already very enticing.

Once plugged, the three pickups sound particularly well suited to each others. All of the selector switch positions reveal interesting sounds and there are 5 of them – one of the small adaptations to modernity I evoked above as Fender offers here a “modernized” version of the ’59. for purists who want a real ’59, please note the aforementioned spare parts that come with the guitar are a 3-way switch, included with wiring schematic.
Trying to describe this guitar’s sound with words appears a very difficult job, so I’ll just say I found from these pickups exactly all that I expect from a good Stratocaster: a rich, precise sound that is pleasant in all sound registers, clean to overdriven. I find this guitar to flatter the mids, at least way more than usual. There’s roundness in this sound.
Playing this guitar is easy, a real child’s play (in the noblest sense). It favors the sound, the notes can sustain, nuances are favored too and the response is great. A very dynamical instrument.
Even with a heavy distortion, the characteristic sound grain is recognizable: no way to drown it into too much dist, or you’d really have to go for it purposefull – and what use would it be? The neck pickup is awesome, the middle pickup is interesting (for once…), as to the neck pickup it perfectly does the job with no shrill, however it sounds a bit “classic”, well it’s no Di Marzio Tone-zone ^^
I also find the 3 knob controls to be very efficient and ideally places, but here, there’s nothing new under the sun.

What else? I don’t use the vibrato, or very little. A 2 additional springs set comes with the guitar, allowing to “neutralize” the floating bridge, hardtail-style for those who want. That’s the aforementioned second enclosed paper bag.

The tremolo arm’s shape won’t suit if – like i do – you set the bridge as close to the body as possible: when you screw it in, it soon interferes with the guitar’s top and if you’re not cautious enough it will leave a semi-circular mark! I intend to buy another vibrato arm to suit this setting.

In the end, I consider this guitar to be an excellent Stratocaster. All elements concur in the same direction, providing it a clear identity. The manufacturing care, finish, attention to details and overall coherence clearly match the expectations for an instrument in such a price range. I recommend it to anyone looking for a precise-sounding and balanced instrument with rich and classic sounds.
I like everything in this guitar, except for its 21 fret, to me there’s one missing! But it’s not a no-go for me as I keep it and don’t intend to part with it.
Beware of the barely readable, tone-on-tone inlays.
Although transgressive, the inclusion of a 5-way pickup selector is a great idea, as far as I’m concerned I wouldn’t even have considered this guitar had it been equipped with a 3-way switch.