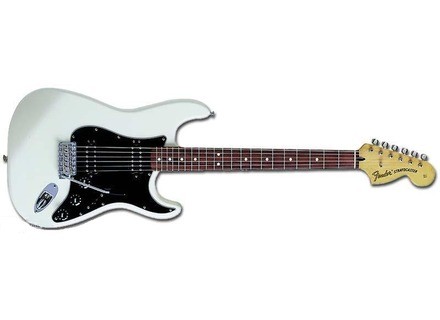 View other reviews for this product:
The Stratocaster has been around for almost 60 years now and there have been a ton of varations. If you can think of it there has been a strat made like it. The Fat strat came around in the 70s when people want a heavier sound from their guitar. Soon after the double fat strat came out. This model is not as popular as the fat strat but it has still been around. The double fat strat is basically a stratocaster with two humbuckers. The specs on this guitar are pretty basic for a strat. It has a poplar body with a maple neck. The neck has a 21 fret rosewood fretboard. The neck has a 9 inch radius so it is pretty vintage. It has the large 70s headstock which I prefer but most people hate. The example I tried out had aftermarket pickups which I will talk about later. This example had a volume knob for each pickup and a master tone knob switched with a 3 way blade selector. I do not think these controls are standard.

The playability of this guitar is pretty stratty. The neck is no super flat but it is alright. The frets are medium. The set up on this model was pretty good. The strat shape basically is very comfortable. The square heel for the bolt on neck gets in the way if you are playing up top. The non locking trem goes out of tune if you use it so dont.

I cant really tell you how the stock Tex-Mex humbuckers sound because this guitar had aftermarket pickups installed. It had a set of EMG's installed. It is kind of like a budget Jim Root signature Stratocaster. It had a set of EMG's with the 81 in the bridge and the 85 in the neck. You do not see many stratocasters outfitted like this for heavy metal. The 81 is a very common bridge pickup for metal. It has a nice high end crunch and decent low end. It retains clarity no matter how much gain you are using. The 85 is good in every position. Most people use it in the neck along with the 81 in the bridge. In the neck the 85 is great for high gain leads and has an alright clean tone. I think this model is discontinued now so I havent had many come through the shop so if I get a stock one I will update this review.

These guitars were never super popular because of the humbuckers. If you play a strat you play it because you like the way it sounds. People who like strats like single coils. Many can handle a splittable single in the bridge but when you go two humbuckers you lose a lot of the unique tones a strat gets with the middle pickup. This guitar is like Gibson making an SG with 3 single coils. It is pretty much opposite of what the established fanbase looks for in a guitar. But for people who are not normally fans of the guitar it can be a way to get them to buy it. People like me who are not the biggest strat fans like a guitar like this because you can get the feel of the strat with the familiar humbucker sound. If you are like me and want to like strats but cant do with the single coil tone this guitar is for you.
Did you find this review helpful?yesno
Cookies help us improve performance, enhance user experience and deliver our services. By using our services, you agree to our use of cookies. Find out more.