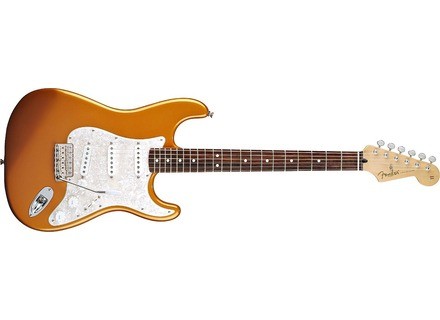 View other reviews for this product:
The Powerhouse strats are Made in Mexico strats that features a pretty cool midboost features. I believe this is the same (or similar to) as the one on the Eric Clapton strat, but I'm not entirely sure. The guitar features an alder body, a maple neck with a stunk stripe on the back, 21 frets with dot inlays, vintage tremolo, three single coils, one volume, two tones, a special mid boost and a five way switch.

The guitar had some fretwork issues, and I tend to find these with the Mexican strats. They're not bad, but I've seen better. The frets were not leveled enough, they weren't crowned enough, and they weren't polished enough. The polishing is easy to fix, but the rest would be about $150 from a good tech to correct, and then you'd lose a few thousands off of the fret height. The radius on this is your standard radius, and I'm not a huge fan. The 9.5'' just doesn't really jive with my playing style. The nut on this wasn't badly cut, but I'm not entirely sure it's the best sounding nut. That said, for what you're getting (price wise), it's quite a decent guitar, and there aren't many better options when it comes to strats.

The guitar's stock pickups were pretty weak. The bridge pickup wasn't the most defined sounding pickup in the world. It had some output, but it didn't have nearly enough for what I was looking for. You could get a cool rock tone, but it was still pretty bright sounding overall. The in between postions were great for that funky and clean tone. I really like these positions quite a bit, and some people who have strats seem to be in these positions all the time. I never use the middle pickup alone, so no comment there. The neck pickup seemed to lack output, and it didn't have the clarity I was looking for. It got a decent clean tone, but that's about it. The midboost on this thing was real cool, however. It added some versatility that the other strats didn't have.

I actually prefer the midboost on this thing to the normal push button thing on the SCN American strats that you see today. While I'm not a fan of the vintage tremolo, the 9.5'' radius and the lack of a 22nd fret, it's still a pretty cool guitar, and there aren't many other strats out there that have this kind of versatility. One thing I would recommend would be to do a pickup swap as that would really bring a new dimension of tone to this guitar.
Did you find this review helpful?yesno
Cookies help us improve performance, enhance user experience and deliver our services. By using our services, you agree to our use of cookies. Find out more.