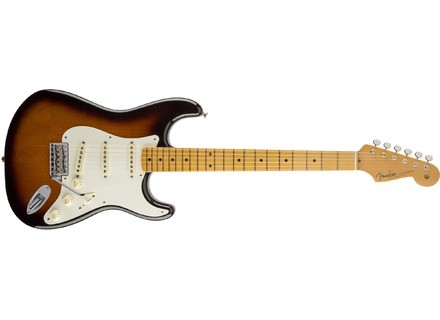 Buy this productView price information >
View other reviews for this product:
This is an American Stratocaster, which is based off of guitar hero Eric Johnson's personal input. The guitar has an alder body with a maple neck and maple fretboard. The guitar has 21 medium sized frets. The pickups are 3 single-coil pickups that are custom designed to Eric Johnson's specifications. The guitar also features a five-way selector switch, and has a master volume and two tone knobs (one controls the tone of individual pickups, the other controls the tone of two pickups in conjunction.)

Playing this guitar is pretty easy. It's easy to get really fast leads going on it, as well as play solid rhythm parts. The design makes the guitar really feel almost effortless to play. I don't know if it is my ideal guitar, but the design and comfortability of playing this guitar is superior to the vast majority of guitars I've tried. The sounds that come out of it are pretty varied, and the pickups are some of the best I've ever heard in a Strat. The guitar isn't very heavy or awkward so ergonomics are fine. The drivers are all stable and everything seems to be in order.

This guitar has a pretty particular sound. It won't be ideal for everyone, however, it's pretty much one of the greatest sounding guitars I've played. This is mainly because every sound and nuance of the guitar comes through, and the pickups are probably the main reason for this. Considering that Eric Johnson designed this guitar mainly for his fans' use, and eventually started using it himself (a surprisingly rare occurrence), that gives testament to how well this thing plays and how good it sounds. The leads ring through with a surprisingly clear tone. My only beef with the guitar is that it can make everything sound slightly "80s", and by that I mean similar to guitar virtuosos like Steve Vai and Johnson himself. This can be kind of unfortunate, so make sure you use the right amp and distortion to avoid falling into this trap, since I don't know anybody who really likes those tones anymore.

I think that the playability and the sound of the guitar (when played tastefully) are pretty much the best things about it. It doesn't look much nicer than any other Stratocaster out there. I think that it's a pretty ridiculously expensive guitar, but it's also one of the only brand new Strats that I've played in a long time that I even remotely liked. A good vintage strat will run you almost twice as much as this, so I'd say this isn't a particularly irresponsible choice. The guitar is pretty stellar and doesn't fall into the same traps that a lot of Stratocasters do.
Did you find this review helpful?yesno
Cookies help us improve performance, enhance user experience and deliver our services. By using our services, you agree to our use of cookies. Find out more.