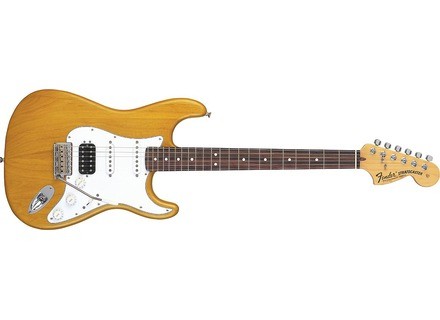 Product replaced by the Fender Highway One Stratocaster HSS [2006-2011].

View other reviews for this product:
With the success of the Highway SSS, Fender AdClin out the range and the HSS. Having bought the Highway dj SSS a year before I knew what to expect (see my opinion), though ... But this time I was directly in the IDE to replace the pickups with EMG Steve Lukhater plate. Before the climb, even when I used a little dand its original version.
So it's a Fender States, at least that's described above with a large round head 70 with Fender logo in the same PERIOD. Channel 21 frets and classic Fender body. And of course a Fender humbucker instead of a simple bridge. Black color, while simple Mex are white, it should no longer be any white cover stock humbucker ... The rglages are those of a layer normal and also the wiring (the I will return). The varnish is still non-existent as the SSS.
In hand, we do not have the feel of a skyscraper while the exception of Highway SSS had made me a better impression. Fittings trs way, it is a Highway.

Say anything about the race, except that I prfr a lacrosse 60s, but you get done. Ergonomics, say anything, on the ds good strat c'tait departure. Alder body, not too heavy my Sir MODEL. The sound, no surprise in position 1 2 and 3, although vintage and enjoyable. In 5, the humbucker has potato, normal is when the same Intrets of this model and allows the large distortion. When I got personal, it's a little trash too, I do not really but I'm too apprci trs (too) demanding, it is true. As against it is not splittable, and then the economy is one that breaks everything. Impossible "to have a Strat's single bridge and say goodbye in position 4 which is almost unusable with the diffrence out the singles and humbucker. The only solution to change the microphone to a splittable humbucker (white preferences ), but good in this price range, there is better elsewhere. The wiring is the same as for a stratum of SSS o may be the big bed when engaging the humbucker on the slecteur .

In view of what prcde, Obviously we are far from an American Deluxe HSS knob with S1 but also a Mexican Sambora signature. It is ultimately not trs versatile as it is of Intrets Start HSS with a cot and two singles and the other the humbucker.

Mcaniques with Shaller locking plate and EMG SL, I got grace the quality of the body and the handle a good alternative economic Lukhater signature Music Man Steve (guitar really high end with an amazing run but obviously not given). If I only want a Start HSS, I would pass my way.
See the source
Did you find this review helpful?yesno
Cookies help us improve performance, enhance user experience and deliver our services. By using our services, you agree to our use of cookies. Find out more.