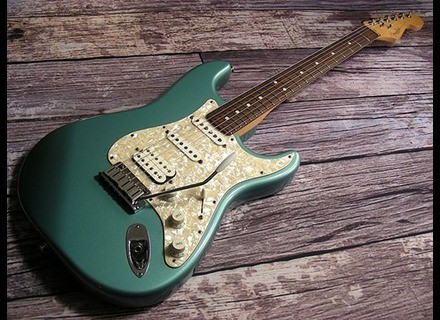 View other reviews for this product:
The Lonestar series guitars are pretty much the same as any other Fender out there. There's nothing too different about them that makes them stick out except for maybe the pickups. Fender tries to say that they're a throw back to the old school Strats, but they're not. The body lines pretty much follow today's stuff, and the necks are still fairly modern when compared to the real old school guitars. The guitar features an alder body, a maple neck with a rosewood fretboard, 22 frets with dot inlays, two point tremolo, HSS configuration, one volume, two tones and a five way switch.

The bridge on this is pretty cool. It's the two point tremolo system, and it works quite nicely when compared to the old school six screw bridge. It's more stable, and I find it feels better as well. Keep in mind, I'm used to floyds, so it's a bit more at home with me than the older, more vintage ones. I like the pop in arm as well. It's a big improvement from the standard thread in one. The neck on this is a nice C shape, and it tends to really fit my hand quite well. The frets themselves were decent, but it was nothing amazing. I've seen better on cheaper guitars. Access to the upper frets is the same as any other Fender in that it's a pain, but it's still not nearly as bad as a Gibson Les Paul. Everything else is about what you'd expect from a Fender.

The guitar had two Texas Specials in the neck and a Pearly Gates in the bridge. The Seymour Duncan Pearly Gates can be quite a bright pickup, and I don't think it was quite at home in this guitar. I would have liked to hear something a bit thicker in this thing as the treble was a bit overwhelming at times. I was able to dial most of it out in the amp, but there was still a bit I could always notice. The Texas Specials are decent pickups. They're fairly heavy in their output, but they're also pretty noisy given that they're true single coils. They can get a cool blues tone and a decent rock tone, but I wouldn't use them for much else. There are better pickups on the market that would suit this guitar, in my opinion.

They're solid guitars, but you might want to look into a pickup swap with these. Not everyone is keen on what comes stock in these, and it can turn people off. The guitar itself is fairly high quality, and you can get great deals on these on the used market, so I wouldn't put too much thought into it if you see these going for sale really cheap. If you're a Fender fan, you'll probably like it.
Did you find this review helpful?yesno
Cookies help us improve performance, enhance user experience and deliver our services. By using our services, you agree to our use of cookies. Find out more.