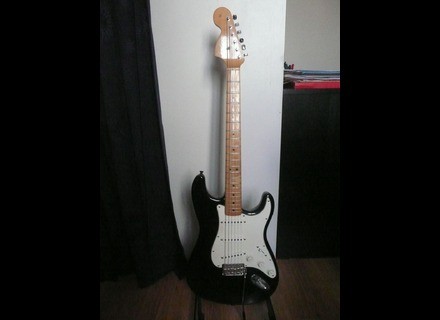 Buy this productView price information >
View other reviews for this product:
Origin: Mexico (2500 francs prices 5 years ago)
as in the photo but the handle is functional and the head is thinner.
I do not use vibrato because of untimely dsaccordage so I blocked the bridge.
I replaced the white pickgard pickgard a brown quail (==> look awesome).

It is a stratovolcano so enjoyable in every way
trs good round.
Access in acute is correct and nothing more.

I changed the original pickups for vintage Van Zandt pickups.
my little Mexican has been transformed into real strato amricaine for 1500 francs.
sounds without too much pot funk I'm not a fan. prfre my position is mid-bridge.
for the blues, but not quite sustain the esprer like a gibson.
it is a guitar master key.

I have 2 other guitars: a Fender Highway and a gibson les paul standard.
the highway was too sound and clean pot: you have to change the pickups.
the gibson is sublime. which sustain (the top but expensive, heavy and not as mat That a fender).

My Fender Mexican (with a change of pickups and skid plate, total cost = 4200 francs) has a great sound that rivals fender without problem with a luxurious amricaine (t made the comparison).
the board to change pickups I t given by mauro emissions that has played including Eddy Mitchell.
hello all.
See the source
Did you find this review helpful?yesno
Cookies help us improve performance, enhance user experience and deliver our services. By using our services, you agree to our use of cookies. Find out more.