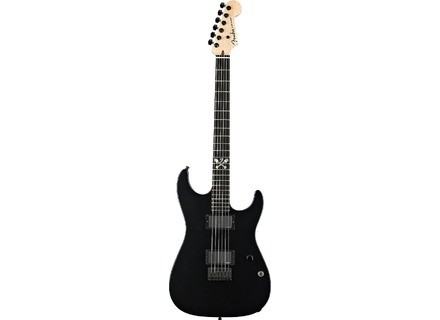 « Precursor to the Jim Root stratocaster »
4

A few years ago Fender started making this guitar and it was picked up by a few guitar players. This was one of Fenders earlier attempts to make a really heavy metal stratocaster. This guitar has a real Chavel Superstrat kind of feel to it. The guitars has a flat black finish which makes it clearly known that this is a guitar for metal. The guitar has an alder body with a bolt on maple neck. The neck has a noticable V shape to it. The fretboard is ebony without any inlays so it has a clean look, it has a single inlay on the 12th fret which is a set of crossed pistons. The neck has 22 jumbo frets as well. It has a set of staggered locking tuners so it stays in tune. The pickups are a set of active EMG pickups. The bridge position is an 81 and the neck position is a 60. It has a single volume knob and a 3 way toggle selector.

The V profile neck is pretty strange at first. Its like a really old strat or something but mixed with the ebony fretboard and 12 inch radius it is super playable. Even thought it is a bolt on these high end Fenders usually come with a smoothed out neck plate which makes it ia bit more comfortable playing on the upper frets. The ebony fretboard is something you do not see much on Fenders and it give s nice feel almost like a Jackson fretboard. The matte finish is smooth to the touch so it does not feel sticky anywhere.

The 81 and 60 is a classic EMG set and its pretty rare for a big company like Fender to put someone elses pickups in its guitar. Most companies this big would half ass some hot pickups and throw them in expecting you the buyer to swap them out at your own expense afterwards. Fender did the right thing and went with the battle tested setup. The 81 is a great metal bridge pickup. It has a high end grind with great bottom end. You can really get a thick sound with it. It does not clean up very well but thats not what its for. The 81 one is for crushing riffs. The 60 in the neck is its sane cousin. The 60 has less output but is more voiced for clean tones and blues tones. The 60 has a great clean tone, something that is missing from most high gain active pickups. This works well with the 81 in the bridge. It is a perfect match if you want crushing riffs but need a clean tone sometimes.

These guitars were pretty cool when they were being sold. Now you see them on the used market, They were about 2k used which is a lot for what it is and they have seemed to have held on to their value a bit. If you are looking for a guitar like this now the Jim Root Signature Stratocaster is a great guitar. It sells for about 1400 dollars and has a similar but more traditional design. It has the same pickups but in more of a 70s strat shape with a big headstock and whatnot. I think it looks cooler. It also has a compound radius fretboard and a more traditional neck profile. If you are looking for a heavy metal Fender I would recommend that guitar. You can still get them new as of now and they are a bit cheaper.
Did you find this review helpful?yesno
Cookies help us improve performance, enhance user experience and deliver our services. By using our services, you agree to our use of cookies. Find out more.