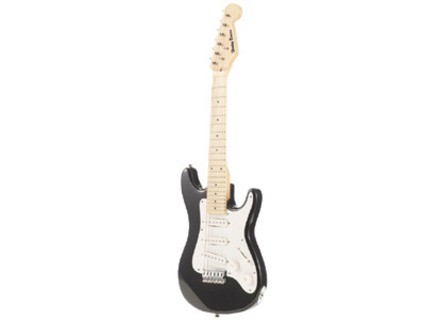 An electric guitar at 49 €, mini copy of a Stratocaster, equipped with 3 single coil pickups and a maple neck!
Toy or real musical instrument, it is reasonable to ask the question.

Harley Benton seems only distributed by the German Thomann shop that specializes in mail order. These guitars are made cheap in Asia, probably China.

The guitar came protected in a cardboard box with some (minor) polystyrene protections that were damaged enough elsewhere (but the guitar has no signs of impact). For the price was right at the same accessory bag:
keys to adjust the height of the bridges and the tension of the neck. Once out of the box, the first sensation was a "Wow she&#39;s beautiful." It&#39;s true that she throws at first glance.

This is a mini stratocaster with small bodies, a threaded sleeve shorter but of normal width. There are a stratocaster shaped head, this is not seen frequently on the copies.
The lifts are arranged in rows and are screwed from behind and focus is centered by an eye from above. They are not oil-filled but are doing their job and holding agreement is honorable. The strings are the most acute rope held by two guides at the head.

The bridge is fixed, the guitar has no vibrato, this seems typical of small guitars. This is not an evil one hand there is enough room in the body and lifts a bit too cheap and would not be appropriate to finish no better than a vibrato vibrato is cheap .

The guitar has three single coil pickups and a switch to five positions for five different sound. I think it&#39;s a real plus on this guitar, most mini guitars have a single bridge pickup.

Also note that the jack of the guitar is on the side in the thickness of the body like a Les Paul and not before as its inspiration. She finally has a volume control and a single tone control.

Guitar for children?
I bought this guitar for my son. At this test, it has 2 1 / 2 months so until Dad is going to use it

I do not know the guitars for children, I was surprised at the neck width is similar to the guitar for adults.
You it must have children with large hands and small arms?
The handle is shorter (pitch of 49cm) I used the tuning is recommended (the bass string to the upper strings): A, D, G, C, E, The guitar is like a size standard on which we play with a capo placed on the fifth fret.

The handle is a pleasant surprise on this guitar. It is in one piece maple and is topped with a touch of maple also. The grain of wood is pretty light and the varnish does not hurt. It reminds me of the handle of a Mexican stratocaster I&#39;ve tried lately. The frets are well posed, and many filed down: you can slide his hand without tearing the skin. It has a U-shaped profile and is a medium-thick end. It is against by a period of adaptation related to the length of the handle, in fact, it seems to play all the time "at the top of the handle." It is understood that on this guitar when playing in 5 th box, we have the left hand in the same position as the tenth case of a normal guitar. Similarly, in block 21, the equivalent (at the hand and in sound) of a box 26! it is therefore entitled to higher notes.

Settings:
The action (string height) was good for me: neither too high nor too low and it does not frieze. I have not made the adjustment handle either. on the other hand had to adjust the intonation adjustment via Saddles. I managed to correctly set all the strings except the low E for which I backed the bridge until the end of the race. Apart from that rope, I saw that the guitar sounds really fair to all parts of the handle and you can consider this exceptional keeping in mind the initial price of the guitar.

Finish:
At first glance I thought this guitar really pretty and well finished. a watchful eye can detect some small problems of finishes. :

- Lack of varnished wood in the thickness of the key at the junction sleeve-corp
- Finish the bevel of the pickguard
- Nut: Nut thickness is not uniform across its width. However, the strings seem to be maintained at the same height

Given the price, those details are negligible: I saw guitars brand whose entries range are often made in Asia less well finished and of course more expensive.

The sound is not exceptional. This is not necessarily surprising given that the price of a single micro brand costs two times more than the price of the guitar. I do not like the sound of all the bridge pickup, I think it&#39;s just ugly (should do with the distortion of course, but its clear I do not like). on the other hand I like the sound offered by a guitar in fourth position, ie micro middle + neck pickup, I find the sound pleasant enough, a report severe acute homogeneous. Do not expect a sound like slamming the stratum. The output level of the microphone is quite small. We must also say that although ca buzz in the positions where a single microphone is active it must be well insulated in the bowels of the beast. I will look at how to arrange when I could remove the pickguard at the next change strings.

I have a few days, I will update this opinion after more use
Well, I regret my purchase at all, it&#39;ll be a nice guitar for my son that I could take a vacation until he have hands big enough. It has everything a great, I really like the fact that it has three microphones as most have a mini-guitar bridge pickup only. I find that it is properly the agreement of even trying floyd&#39;iens pink-bends, for cons I think the mechanics may not be up with a draft much higher (I think the guitar is delivered in 9-42).
The game on the fairly short run requires some adaptation. After this is not a toy but a real instrument that is fun to play!

Assets:
- The price
- Handle
- The sound in 4 th position

Cons:
- The Harley Benton: lots of people will not buy because they believe that outside the major brands, and below a certain price is shit
- Sound
- ...
See the source
Did you find this review helpful?yesno
Cookies help us improve performance, enhance user experience and deliver our services. By using our services, you agree to our use of cookies. Find out more.