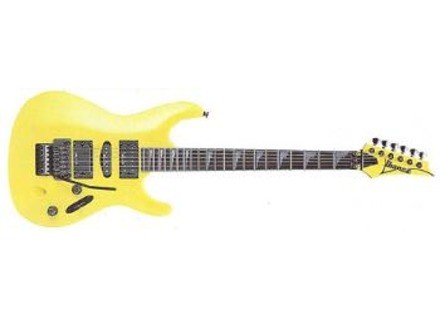 540S, STC-Shaped Guitar from Ibanez in the Roadstar Pro series.

View other reviews for this product:
Designed and developed in the California study office Hoshino USA. Meeting in Japan with US parts (microphones, electronic, etc ...) manufactured from 1988 to 1991. This is the guitar for the first 3 albums of the immense Joe Satriani. She's Photo Album Dreaming.
Compared to the photo, my copy has not a 5-way switch that came in 1991 but 3 toggle switch to cut or open each microphone and the third switch splitter twice in singles. Suffice to say that the palette is great, I counted 12 possible combinations microphones ...

Feature:
- Mahogany body carved from a single piece end like a saber and superb resonance and sutain worthy of a Les Paul ...
- Floyd Rose bridge with inscription "back stop, power play system"
- Channel Wizard ultrathin, fastest sleeves that I met, I play two times faster on it than with my fender ...
- Blocks rope bridge quality
- 2 single coil and 1 double splitable developed by Di Marzio Ibanez USA (sounds of hell)
- 3 Switch (1 for each micro switch 3 positions with 1 double) for 12 positions!

That I think I've been around the beast ... I'll just added that I bought 9000 francs in 1989 without case at the time or fender US 4700 francs was sold with hard case ... . Anyway, she really wants the money invested. Note though that the patent ultra tight cracks in the heel with time, but nothing bad, it's just aesthetics ...

If Satriani recorded three albums, it's not for nothing. It really is a pro guitar, very upscale.
The handle is really a highway, the fastest of all Ibanez sleeves!
The guitar is fine as a sword so lightweight. For ergonomics is unbeatable, even an average guitarist can play in comfort with this guitar. Even a beginner can progress through the handle with ultra easy to play!
You plug the guitar and clear channel as ultra saturated, it sounds great!
Really a guitar that can do everything from blues to death including of course the master's style Satriani.

There is not a style of music that this guitar can not play. It can go from a fender to a big sound Gibson and of course the typical sound Di Marzio (ultra precise with huge sustain the double).
- On the clean channel, the guitar sounds better than a fender US, clearer, warmer sound almost acoustic! We can play blues, funk (and even jazz using the 3 microphones simultaneously).
- On the overdrive channel sounds good hard blues genre ACDC
- On the overdrive channel, we enter the thick of things stand out beautifully harmonic, serious follies have a potato.
whatever the chosen micro even simple sounds. But of course the humbucker (pro bam) sends the cannonball, notes sing and seem endless, which is rare on a guitar with a Floyd. Quite simply, the guitar longer sustain a Les Paul! Really amazing.
By far my best guitar!

Certainly I have paid dearly for 1500 euros at the time, with inflation it would give 2500 euros today but the guitar has 12 sounds, the equivalent of 3 very good guitars. In addition it has aged well apart varnish that breaks the heel but anecdotal and current on fine guitars very hard varnish. This is guitar pro par excellence, much better than the current 1000 JS is less well finished (basswood body) and more limited in terms of sound with its two-fold: it was not the 12 positions! The Pro 540 saber usa / japan A guitar that can do everything and does it wonderfully: 10/10
See the source
Did you find this review helpful?yesno
Cookies help us improve performance, enhance user experience and deliver our services. By using our services, you agree to our use of cookies. Find out more.