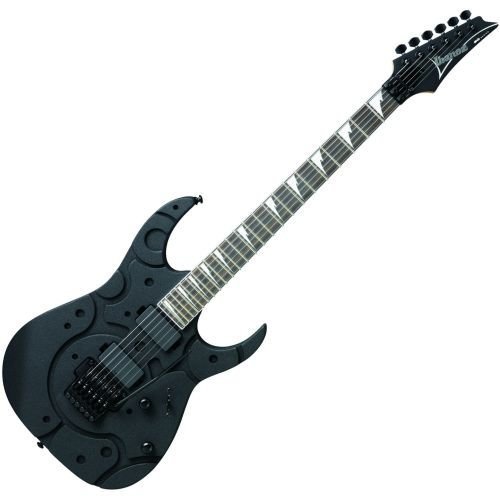 STC-Shaped Guitar from Ibanez belonging to the RG Standard series.

It’s already been 25 years. You wouldn’t think so, but the RG model from our Japanese friends, Ibanez, first appeared a quarter of a century ago, and has since made its way into the Metal and shredder guitar hall of fame.

It’s already been 25 years. You wouldn’t think so, but the RG model from our Japanese friends, Ibanez, first appeared a quarter of a century ago, and has since made its way into the Metal and shredder guitar hall of fame.

I didn’t know anything about this particular model beforehand, so I was quite surprised when I opened the case. Though the strat-like shape, the neck, and the hardware are standard for an RG, the finish was anything but typical. A spider web, at the center of which is a volume knob, is sculpted into the very wood of the guitar, and covers the whole body. The body is also covered with a rough black granular finish. After endorsing the likes of Steve Vai, Joe Satriani, and Paul Gilbert, is Ibanez now endorsing Spiderman? The answer is probably negative, but I imagine that if he played a guitar, it would look like this RG420.


After the initial surprise, I was curious to see how it felt. In spite of the carved spider web, the weight is similar to classic RGs. The finish feels strange and gives the impression that it’s made of plastic. But it’s only an impression, because like its predecessors, the body of this RG420 is made from basswood.

The neck, on the other hand, feels very familiar due to the fact that the Wizard II neck, which is flat and thin (great for shredding and other fast playing), has been a fixture on Ibanez guitars for a longtime now. On this guitar, the neck is a 3-piece maple, with a bound rosewood fingerboard. The latter has sharktooth inlays as fret markers. There’s also a white lining along the neck; a detail that used to be reserved only for high-end models.

As far as hardware goes, there’s an Edge III bridge, which is an Ibanez variation of a Floyd Rose, and seems to be well made (without of course, being in the same league as high-end tremolo bars). One strange detail is that while all the hardware is black, the tremolo’s pivot screws are the color of normal steel. Normally, you’d think the whole thing would have the same color, but maybe there’s a good reason behind that. As for the tremolo bar, its height is ideal: Floyd Rose bars are usually a bit too high whereas this tremolo bar falls nicely under the player’s hand while playing. On the other hand, because it doesn’t seem ultra solid, one wonders whether the tremolo can stand up to years of hard playing and dive bombing.


As for the pickups, we find our old friends, Ibanez’s V7 and V8, directly mounted into the body and covered in the style of EMG pickups. These pickups are controlled by a volume and a tone knob, and a 5 position megaswitch-type switch. This switch lets you get 5 different pickup combinations: position 1 is bridge pickup alone, position 2: the interior coils of the split humbuckers, position 3: the two humbuckers in parallel , position 4: neck humbucker with parallel coils, and position 5: the neck humbucker with its coils in series. This should give interesting results once the guitar is plugged in.


Come to think of it…let’s plug it in.

As you might expect, the guitar is a little disconcerting at first. The rough granular finish gives it a strange feel. Luckily you can feel the basswood underneath, otherwise it would feel like a toy. However, this feeling disappears as soon as you play your first open-chord: it has nice resonance, its got sustain, and the RG purrs nicely in your hands. The neck, typical with Ibanez, is a real pleasure to play for those who love thin necks. As usual with RGs, the cutaway sections give easy access to the highest frets, especially since the neck joint is quite ergonomic and doesn’t have a neck plate. Basically, anyone used to playing an RG will be on familiar ground once they get used to the finish.

Because I couldn’t turn my Laboga all the way up in my apartment for this test, I decided to use, for the first time, a home studio "classic" to test the guitar. I therefore plugged the axe into a Line6 Toneport UX2.

Clean sound test: in the following example, I played the same chord progression in all the 5 possible pickup selector positions, starting with position 1 (only the bridge humbucker). On the right, the guitar was recorded direct and dry: no amp modeling and no effects. On the left, the "clean guitar" preset (a simulation of a Roland JC120) was used. I must say that in spite of the relative neutrality of the basswood used for the body, the RG420 got nice clean sounds. In general, pickups are often Ibanez’s weak point, but I was pleasantly surprised by the V7 and V8 pickups. They deliver a sound that’s never too aggressive, with a rather strong output level without ever going over the top. Positions 2 and 4 of the pickup switch are interesting, sounding quite strat-like but at the same time sounding slightly different. John Petrucci fans will probably go for position 2 which is pretty similar to the characteristicly clean sounds he gets.


Distorted test: a small demonstration without pretentiousness, and just for the fun of it. The rhythm guitar to the right side uses a JCM800 simulation using the "Metal Rythm" preset with the gain slightly turned up. For the rhythm guitar on the left side, a "Sandman" preset using a Mesa Boogie Triple Rectifier simulation was used. In the center, using the preset "Metal 80" (JCM800), the first phrase is played using position 1 (bridge humbucker alone ), and the second phrase using the neck pickup. The last few notes are to show that the tremolo does indeed work. You can hear the sound characteristics of the pickups: balanced, versatile, and they give a "well-behaved" quality to the RG, but always remaining precise and straightforward. A nice trait is that the neck pickup remains defined while distorted while many others become muddy and imprecise. This will allow virtuosos to play fast distorted riffs without the whole thing turning into a sonic soup of distortion.

Globally, I have to admit that I could become attached to this guitar, and not because of getting my hands stuck in the web. Of course, the most original part of it is its finish, that you’ll either like or hate, and that might feel a little too strange for some. But at the risk of repeating myself, I’ll say it again, this guitar is not a toy , there’s a real RG under the spider web, for a reasonable price, considering the originality and specs of the axe. And if the spider web isn’t to your liking, the RG420 also comes in an "armor" (Iron Man?) finish.