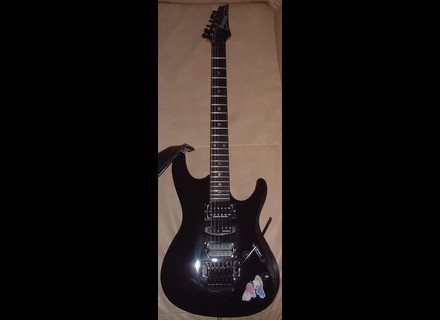 S500, STC-Shaped Guitar from Ibanez in the S Standard series.

So here good this guitar is a bit special lol is a model of the first Sabre, no reference to the exact model (470520 etc ...) just a serial number.
Made in Japan
Channel 3 rooms
Vibrato edge super rare at the time lol .... well in about a sword I've never seen anything else ay understand .....
Marks (original I said) in abalone.
5-way switch Micro origins v7 v8 s2 changed for a Special Duckbucker Steve and Duncan SH2
Black hardware Gotoh
Cargo jumbo, tone & volume knobs fender type in (smaller) as the original .... it is the only unique ibanez I've seen of origin with the + buttons like that.
For the record this guitar was commissioned by my music mag as a 470.
Following a delay of delivery (c is one of the first 1992 I believe) + then a package supposedly stolen from me very angry and the mag in question, tells me flatly result ibanez they'll apologizes to me delivered directly to me by ups (it was rare at the time lol).
Actually five days after Mr ups going on at home .... Packages coming directly from Japan to unpack surprise namely: benchmarks - three parts-round special buttons + micro (normally I have the v1 v2).
I do not know what happened but c is good in the end I have not stolen at least build quality and fittings better than good but now they are also cheaper then ....

Bolt Type Wizard 1 22 3-piece Jumbo cargo boxes very thin profile flat highway kind ..
Very pleasant to play.
Easy access to the entire set.
Very light guitar, it's a sword body very fine grip top wig.
Despite its weight I'm always surprised how it sounds: It's full and rich. To put it not with a les paul set neck lol but it's more "mellow" that a fender a little between the two what.
The vibrato cash has any delusions Steve vai without flinching he is remarkably well to the agreement also try having a Gotoh premium over I returned to my edge (usually ....) The Gotoh was not the best all (thank you to my luthier in passing)

Replaced by a Special duckbucker dirmazio Steve Duncan from home and sh 2 is still in Duncan .... Nirvana for me lol (I must say that I compare a lot of other mics before I chose not to snitch). With this combination the guitar is more "typical" and sound much better.
After all try my combination with the switch and the next
Steve special double
Steve split one special
Ducbucker only
Sh2 split single
Sh2 double
All this goes into a mesa boogie quad.
The guitar has a really good sustain given its weight.

).
I was really and try a lot of other guitar and apart from some of the RG musicman (yum yum) and some Tom Anderson have not found anything that suits me better than my old sword, I would not say the rest is c the shit or worse it's just a matter of taste I have never been as fender or anything ...... guibson

For negative points against ..... the versatility that is good, but the foundation if it has potato she clearly lacks character by changing the pickups it is much better.
Another small flaw is necessary to cut the balls of the strings for the new ibanez strong vibrato (but hey I have not tried either a long-term).
See the source
Did you find this review helpful?yesno
Cookies help us improve performance, enhance user experience and deliver our services. By using our services, you agree to our use of cookies. Find out more.