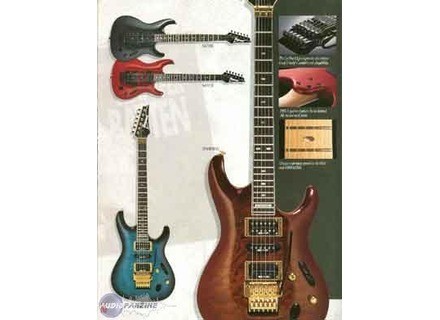 S540FM, STC-Shaped Guitar from Ibanez in the S Standard series.

-The finish is good and the trs grip of the instrument is enjoyable trs.
The handle is trs-end, a real highway. Comes with 09-42 strings, the action is low and rev the game very easy. Personally, my strings are 09-46 and yet the handle is always faster than me (I will have one day, I get it

). The edges of the frets have t re-polished before purchase as they hung a little (pbm CONTRL quality Ibanez?)
-The body is thin at the edges: the weight of the guitar is lightweight and well equilibrated either standing or sitting. You see the Les Paul? Well it's the opposite level weight and ergonomic, yet it is the same wood species.
-Son: config ultra versatile double (QM1 and QM2) are humbuckers in cramique output level between the PAF Pro situ and in Norton Di Marzio. According to an Internet user who made several changes to its micro-studio sessions, the Qm + versatile and seem to better adapt the S540FM. Forcment they have less personality .... The Qms1, it is a simple micro Alnico V.
-The Floyd ... A rgal. Well, like all the vibrato waves galre it a bit to tune the guitar to beginners, but once given, was not moving! It has almost nothing to envy new series ibanez. Except that for rgler position 0 (rare), it is dvisser the plate on the back of the guitar. FYI, the new ZR possdent floyd sries of a wheel across the plate.

This guitar-match styles Varis trs. It's a bit a intermdiaire between a Les Paul and Strato. Having had an Epiphone Les Paul with Seymour Duncan, I was looking for a more crystal-clear without losing the fat in microwave double distortion.
In his clear, I use bcp positions intermdiaires or double splits that are more slammin and bcp and lighter.
Thanks to the volume knobs and one can raprocher Tone Sound microphones have less gain (especially using an overdrive) without losing too DEFINITIONS (although this is common on other guitars).
-Having pleusieurs multi-effects, pr-amp ... I can say that it goes well with all sorts of things as given the versatility of its electronics in the clear, as saturated.
-The BMOL (because it takes much): its strength is also his "weakness": versatility. I mean who says trs versatile necessarily less typ said (in the analogue world). Indeed, we sometimes regret the "imperfections" and other roughness in the sound that make a guitar legends such as Strato, the Tl or Paul's example. If we want exactly the sounds you have to buy the original ...

I bought it-7790F in July 1999 without having had the last change.
-I love its versatility, the quality of its sound and its finish (small BMOL for frets), exeptional comfort. The sound is more flattering than sries RG sounding more "bland" and more oriented metal.
Think-install a split that allows to use the bridge or neck pickup in single coil alone (= 1 or 5 position selector) and rotate the neck pickup for his party to split the handle and not to the micro environment (a sound and strato +).
-Consider installing "strap locks" because the original belt clips that make you well-scaled fake good one day.
Ngoc-tuit a hard cardboard because the hair mass origin is an insult to the guitar.
In-Brief: A beautiful instrument trs well finished, lightweight, with an exellent lutherie.Un good compromise for those who want / can not have multiple guitars to play in different styles. The sound is not typical but trs sounds enjoyable (as opposed to RG). It is prcis, hot or slamming the following positions.
Trs enjoyable to play, it allows the long hours of rpt / recording without ruining the shoulders (set up) or leg (seated).
See the source
Did you find this review helpful?yesno
Cookies help us improve performance, enhance user experience and deliver our services. By using our services, you agree to our use of cookies. Find out more.