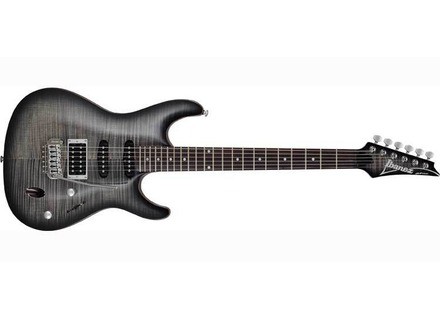 View other reviews for this product:
This guitar is manufactured or I do not know, probably in an Asian country.
It has 22 frets and the bridge is not a bridge but a flyod a vibrato, the rest do not ask me more ^ ^
Pickups: Config HSS (humbucker H =, S = single)
It has a 5-way switch for pickups, one tone and volume.
The neck is fairly thin and flat, it was well in hand.
I put 8 because perfection is not of this world and I wanted 24 frets, but it dfend well in its class. (High Quality)

The handle is enjoyable, as said before, it is flat and the end of a game ... plutt promotes fast.
Access in acute Submitted do no difficulty particulires (stratode. ..)
The guitar as mahogany, it can be felt in the left shoulder APRS an hour of play up, but not overly heavy.
The sound can be easily modulated thanks to the many combinations of tone and microphones available .. so is obtained relatively easily son.Aprs good, always time to find her.

I play mostly metal but hard rock or blues (eg acdc hard rock but a bit bluesy at times ..., metallica for the rest, but there's not a ^ ^) so this guitar suits me well enough that I would have two humbuckers can be better served ... On the line 6 spyder 2 (30w) is going well especially with DIFFERENT presets, but for the line6 takes some time before get used to it ....
Otherwise, it must be rgler to clean, tone preferences not a substance but rather quite lev and a single coil (the handle will not hurt ^ ^ depends on each APRS) since The humbucker has a sound a little too heavy I got a .. (in clean vidamment ^ ^ otherwise the humbucker is not bad in disto .. jessaye would have another to see the difference.)

I have been using ending for two years, I still have my good former MODEL gray without the True Duo but I do not know what I would have a contribution to the limit .. if they had put a Humbucker in the neck .. good short end
I love this guitar as a bone intgralit it is what it's worth, is that the midrange, and I intend to point me in 6 months to a year-scratching srieuse (probably ESP) but to begin a year of APRS electric folk (and 7 of piano xD I talk about my exprience l ^ ^) is a good guitar.
Before, I tried a Cort G250 (I think) but not in depth but a fender mex .. 'but I had not sousous (end if it was me for anything ^ ^) and then a Epiphone Goth SG ^ ^ all black (it was the rotten, sounds good and is not trs dsaccordait end in 2 minutes ... that was good j'lai 3-4 Smain the one hand) and veiled I also test if the ibanez just below the level that is more produced now .... remember the name of the MODEL ..
With exprience, may be could I turn directly to the Fender Fat Start Mex'qui cost 200 euros more (I need a humbucker me ^ ^), for a direct scratches a bit better. ... but frankly I do not really regret this choice
See the source
Did you find this review helpful?yesno
Cookies help us improve performance, enhance user experience and deliver our services. By using our services, you agree to our use of cookies. Find out more.