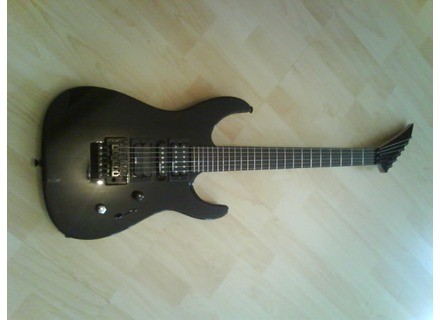 PS4 Dinky, STC-Shaped Guitar from Jackson in the Performer series.

View other reviews for this product:
Jackson dinky form (stratum, what!) Made in Korea jusqy = ue the late 90's.
Alder body, maple neck and rosewood fingerboard 24 frets.
The scraper adopts the conventional configuration MSM are two double and one single, stamped Jackson, and served by a volume (which is when it is turned crrrriccc) + a tone and a 5 position switch.
A licensed Floyd JT500 completes the picture, like a reverse head, which brings a touch of originality to my guitar both sober.

The handle is my once pleasant, fairly flat (not like my Les Paul), access to treble is not bad, although the junction body / neck is thick enough. Otherwise the guitar is well balanced, light, and the game is comfortable

Jackson is often criticized for its poor quality microphones, which I confirmed. The pickups are clearly not up to it, and do not expect to have a thrashy sound of the fire of God with these microphones there!
The double bridge has a good level of output but has little bass and too much treble, but it screams in the wrong sense.
The microphone can be operated in simple clear sound but its output level is too low, too bad!
In contrast, the double neck is doing better, with sounds quite flattering light as saturated, but it's not good either ecstasy!

Purchased 96 new end to 2500F, it remains a good investment for metalheads who are new guitar, even if the PS-4 shows real versatility. However due to a mean violin and frankly not up to the microphones, the Jackson remains far behind the Japanese and of course the American brand.
See the source
Did you find this review helpful?yesno
Cookies help us improve performance, enhance user experience and deliver our services. By using our services, you agree to our use of cookies. Find out more.