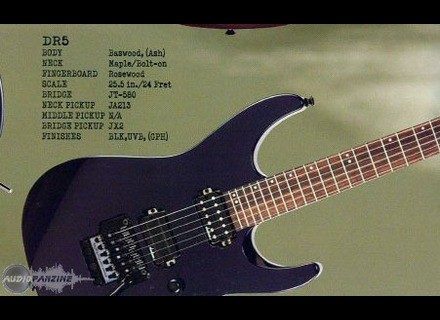 DR5 Dinky, STC-Shaped Guitar from Jackson in the Pro series.

View other reviews for this product:
Made in Japan with as much care as sisters USA.
Reserved for the Japanese and American market.
I brought this model only because Japan is the only Jackson's catalog have a body ASH (ash), which gives a lot of acrimony in the attacks and a lot of sustain.
The build quality is very good:
the handle is a true success, close but not too large compared to the Ibanez RG 550.
The frets are particularly well finished, it does not catch, it travels very quickly the 24 boxes of the handle.
The Floyd is doing rather well, even better than an Ibanez RG is, by far!
The pickups are a bit cold cons oriented metal. We like it or not.
To sum up the build quality is far superior to Jackson DK2 and I do not even JS 30!

The handle is the strong point of the guitar is a highway, it is ideal for complicated playing techniques, taping, etc. ... the shredding but we can play good old blues / rock playing without problem grows over it.
The body smaller than a Fender is a perfect fit. I love the fact that very reverse head Metallica! I love the dot markers at the top of the handle, it is professional and understated. In short it's less bling than the teeth of sharks and it's easier to figure it out
Ash provides a huge attack and a very long sustain, which is nice for a guitar with a floyd.

Here, I'll be a little hard but it's a matter of taste
JA 123 Micro stick has a good output level, and a very good definition in saturated mode but is a little cold clean. For me playing the ZZ Top is not the top! This is better than EMG HZ but less good as a Paf Pro Di Marzio.
The bridge pickup JT 580 benefits the body in Ash (ash) to provide impressive attacks, it is better than the neck pickup by offering a very good performance.
But again, it's pretty cold and too set to play the blues-rock. My Fender Stratocaster is better in this area.
In fact it is a guitar that I use mainly for solos (long sustain Floyd +) or very violent rhythmic Rock.
So I issue a little restriction for the lack of flexibility but on the other side can not have everything ... This

Jackson offers a violin and a finish worthy of the highest caliber of U.S., its very simple black design will not appeal necessarily to teens like these microphones oriented metal. This brief is not a guitar beginner who seeks his style. It is for the Hard and metal. But hey it's a Jackson!
See the source
Did you find this review helpful?yesno
Cookies help us improve performance, enhance user experience and deliver our services. By using our services, you agree to our use of cookies. Find out more.