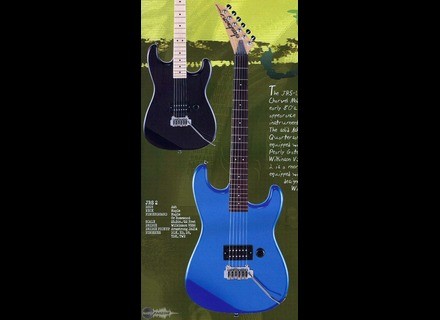 JRS2, STC-Shaped Guitar from Jackson in the Professional series.

The JSR2 is a throwback to the old school Charvel days when it was normal to have a vintage tremolo, one humbucker, one volume and where you played pure shred. The guitar has the following specs:

This is a fairly old school guitar, and that's one of the reasons why I'm not a huge fan of it. I'll start with the good stuff. The guitar was put together nicely. There were no issues with the neck pocket gap or the finish on this model. The frets were also in pretty good condition, albeit slightly grooved due to wear. The Wilky was also pretty cool. The bad parts were the fact that the nut was starting to wear (easily corrected) and the fact that there's no neck pickup. I'm a big user of the neck pickup with clean tones and leads, so not having that neck pickup was a bit of a pain for me.

This guitar sounded pretty awesome. The pickup in the bridge was a Seymour Duncan JB, and when you paired it with the ash, you got a super cutting sound with some sick low end. The low end in ash is pretty unique in that you can get some really cool and fat sounds, but the treble of ash is extended to be very cutting. It's a pretty interesting tone wood. The JB in the bridge works great for those searing lead lines and sick 80s riffs, but I find that it doesn't work great for cleans thanks to it being in the bridge position. I was never a fan of bridge clean tones as they were always a bit too bright for my liking.

The lack of a neck pickup is the biggest deal breaker for me regarding this guitar. I really missed it whenever I wanted to play some lead lines as I tend to play lots of legato. The fat tone helps make everything sound more fluid, I've found. Aside from that, it's a pretty solid guitar, and I really liked the Wilkinson that was installed on this guitar.
Did you find this review helpful?yesno
Cookies help us improve performance, enhance user experience and deliver our services. By using our services, you agree to our use of cookies. Find out more.