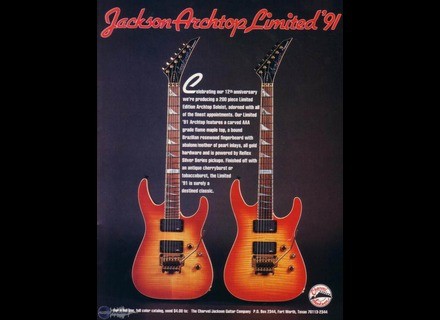 View other reviews for this product:
The guitar has the following specs:

These guitars really do rival the USA models in nearly every aspect. First of all, the guitar felt great in terms of overall weight. The guitar even has similar specs as most of the USA models, so you can do a direct comparison, almost. The neck felt great, and the fretwork was top notch. The floyd on this is actually a pretty solid floyd, and I've used it in the past without any issues. It's very similar to the Schaller, if not the same. The flame maple top on this was very striking, and the construction was up there with the best.

This guitar sounded phenomenal. The guitar had EMGs installed in it which weren't the stock pickups. I forget what they were, but they were similar to EMGs in terms of looks. The guitar had an EMG 81 in the bridge and an EMG 60A in the neck. The EMG 81 in the bridge had some nice cut going on, but the mahogany wings helped calm down some of that treble that's normally associated with the 81. It was a very nice marriage of proper pickup choice and woods. The 60A in the neck was great for cleans, and I personally prefer the 60A to the 60 in most situations as it tends to sound a bit warmer. Lead tones were almost single coil-esque, and it got a pretty cool tone that most other neck humbucker guitars don't seem to exhibit.

If you can find one of these at a good price, I recommend jumping on it. These are the well kept secret in the Jackson lineup. The quality is super high, and they sound amazing. The necks on them, the fretwork, everything seems to be just as good as the USA models out there.
Did you find this review helpful?yesno
Cookies help us improve performance, enhance user experience and deliver our services. By using our services, you agree to our use of cookies. Find out more.