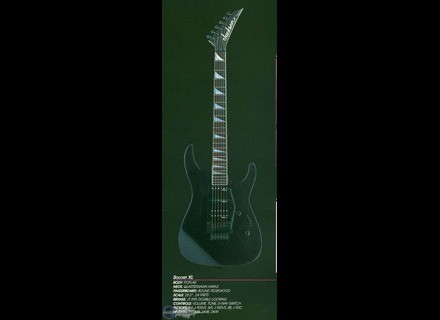 Soloist XL, STC-Shaped Guitar from Jackson in the Professional series.

View other reviews for this product:
The poplar wood on this is the main reason these guitars aren't considered quite as good as the USA models, in my opinion. The guitar has the following specs:

This guitar was pretty heavy for whatever reason. I'm not sure if it was due to the choice of poplar or what, but it was a little heavier than the mahogany version that I had next to it. The neck-thru design helps prevent any issues regarding neck pocket gaps, so that's always a good thing. The downside is that your main tone wood becomes maple, and not everybody wants that. The fretwork on this was pretty good, although some of the fret ends could use a bit of filing. Aside from that, it was a fairly normal Soloist model.

The poplar wood in this was what lead to the tone not being my favorite out of all the Jacksons I've played in my lifetime. I'm just not really a huge fan of poplar as a tone wood, so keep that in mind. The guitar had the stock pickups in it which were some Jackson made pickups. The bridge sounded decent, but it lacked dynamics and clarity that is normally associated with the higher end pickups out there. The neck and middle single coils sounded like average single coils. They were noisy, the clean tones were cool, in between tones were cool, but I found they lacked the power that I was looking for when I go to solo.

The poplar wood in this isn't my thing, so I've rated it accordingly. The guitar itself was put together pretty decently, so there aren't a lot of issues regarding QC or anything like that. The bridge in this could be replaced with something a bit better, but it's not a huge deal. The biggest thing would be the stock pickups; replace those if you plan on getting one of these.
Did you find this review helpful?yesno
Cookies help us improve performance, enhance user experience and deliver our services. By using our services, you agree to our use of cookies. Find out more.