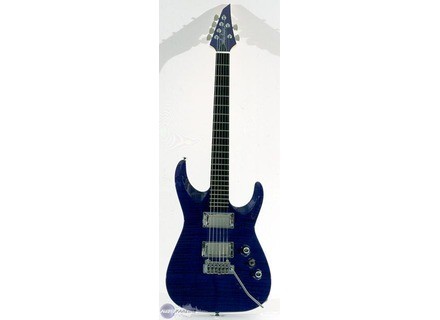 AT1 Archtop, STC-Shaped Guitar from Jackson in the USA series.

« Cool mix of traditional and modern »
4

View other reviews for this product:
This is one of the more rare double cut guitars that Jackson has made. Instead of the normal 24 fret superstrat guitar that they normally go for, they decided to go for the more traditional kind of looks/features. The guitar features a mahogany body with a maple top, a maple neck with an ebony fretboard, 22 frets with no inlays, a Wilkinson two point bridge, two humbuckers, one volume, one tone and a three way switch.

My favorite part about this guitar was the Wilkinson bridge. These are great bridges, and I really wish more manufacturers would use these bridges. I'm not entirely sure why so manly prefer to use the Fender style ones when these feel better. The neck on this was very cool. It didn't seem to be quite as thin as some of the other ones I played, but it was still a more modern neck. The frets were in good condition, and I was able to get the action I wanted with this guitar without much of an issue. The nut was slightly worn, but it wasn't a huge deal. A little nut sauce fixed any issues I had. The rest of the guitar is pretty much on par for the course when it comes to Jackson guitars.

The guitar had the JB/59 combo installed in it. The JB in this guitar was very nice. If you've never played a JB, well, what kind of rock are you living under? It's probably the most famous aftermarket pickup today, and even though the Super Distortion came first, I'm pretty sure this has outsold it and been used in more guitars thanks to manufacturers like Jackson and ESP. It's a high output pickup that can do pretty much any genre you can think of. From blues to death metal, it has the perfect amount of everything to do whatever you want. One problem is that it can get a bit stringy in the mids/high end, but it depends on the guitar. The 59 is one of my favorite neck pickups as it's thick, but it has enough cut to still be heard. I especially like the clean tones on the 59.

These are pretty good guitars, and it's a shame that you don't see them as much anymore. They feel great, the fretwork on them is pretty good, the bridge and other hardware are top notch quality and everything about the guitar just seems to be great for those looking for a double cut that mixes both modern and traditional.
Did you find this review helpful?yesno
Cookies help us improve performance, enhance user experience and deliver our services. By using our services, you agree to our use of cookies. Find out more.