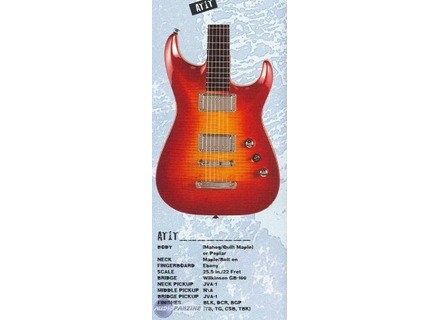 AT1T Archtop, STC-Shaped Guitar from Jackson in the USA series.

This is the hard tail version of the AT1. Why they added the T to the name, I'm not entirely sure. Normally, I'd view T as standing for "tremolo," which means this name should have been given to the other model, but whatever. I guess it stands for hard tail or something. The guitar features a mahogany body with a maple top, a maple neck with an ebony fretboard, 22 frets with no inlays, a hard tail bridge, two humbuckers, one volume, one tone and a three way switch.

One of my favorite features from the normal AT1 is gone. Some people may like the fact that this is a hard tail, but I tend to prefer tremolo bridges, and the Wilkinson is one of my favorite non-locking two point bridges out there. Instead, we have a slightly different tune-o-matic kind of bridge. It's not my favorite when it comes to hard tails, but I can live with it. This guitar has a nice maple top on it that looks pretty killer. The flame stands out quite nicely, but it's not the most intense flame that Jackson has ever produced before. The guitar had locking tuners installed on it, and those were pretty nice. I wish all manufacturers would get on board and start adding these things so we don't have to keep butchering our guitars to add them.

The guitar had an EMG 89 in the neck and an EMG 81 in the bridge. The EMG 81 was great for metal. It's super tight, and it has lots of cut to it. Combine that with the mahogany body, and it helps even out some of that piercing high end that you can sometimes get with the 81. It stays clear under high gain, but it's also super compressed. The 89 in the neck is actually two pickups in one. It's kind of like the EMG 85 and the EMG SA put into one pickup. In the humbucking mode, it's super fat sounding, and you can get some sick legato. It's slightly brighter than the normal 85, but they're pretty close. The single coil mode is pretty sick for clean tones, and I really dug the tones I was getting out of this thing. They're kind of sterile at times, but they're still pretty cool.

This is a very solid guitar, and if you're a fan of hard tail bridges, I'm sure you'll love this guitar. I tend to prefer the Wilkinson model, but that's neither here nor there. The guitar itself was high quality, and I'm sure anybody who buys this would be happy with it. I can't speak for the stock pickups in it, so I'm not entirely sure how they jive with this guitar. If they don't sound great, just replace them.
Did you find this review helpful?yesno
Cookies help us improve performance, enhance user experience and deliver our services. By using our services, you agree to our use of cookies. Find out more.