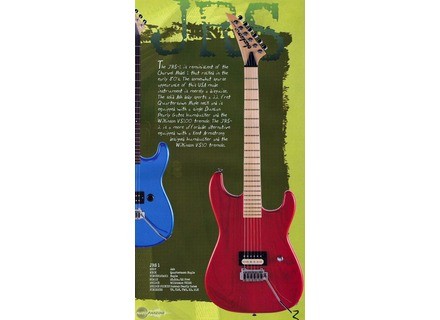 JRS1, STC-Shaped Guitar from Jackson in the USA series.

Jackson is mostly known for their Soloists, their Dinkys and their V guitars. However, this is bringing back the old school looks and features that Jackson first started out with way back when. This is a pure 80s guitar, and it doesn't try to be anything else. The guitar features an ash body, a maple neck with a maple fretboard, 22 jumbo frets, no inlays, Wilkinson tremolo system, one humbucker and one volume knob.

The fretwork on this was great. The frets were huge, and they were properly crowned. I really like seeing that as a lot of manufacturers are skimping on the crowning process as of late. The fret ends were rounded properly, and they didn't cut your hand every time you moved up and down the neck. The guitar itself was a bit heavy thanks to it being ash, and I'm not the biggest fan of heavy guitars, but it wasn't too bad. The maple on this was quartersawn maple, so you're going to have some slightly different grain pattern than you're used to, but that's to be expected with Jacksons. For what it's worth, quartersawn doesn't guarantee you're going to get a more solid piece of wood. It actually tends to favor twisting instead of bowing. Bowing can be fixed via the truss rod (within reason). Twisting cannot. The Wilkinson on this was great, and it happens to be one of my favorite non-locking two point tremolo systems out there.

The guitar had a Seymour Duncan Pearly Gates in it, and man, combined with the ash body and maple neck, it was very bright. I found myself turning down the treble on the amp quite a bit. The one thing worth mentioning is that this guitar was very resonant. With the correct pickup in it, I think it could have been one hell of a guitar. I didn't get the chance to experiment with swapping pickups in this thing, but if I had to choose, I'd either choose something like the Duncan Custom Custom or the DiMarzio Evo 2. Both of those pickups are very cool and can deliver some great sounds. Maybe I'd even try a Tone Zone...

The guitar is great, and I liked the looks of this quite a bit. I especially liked the Wilkinson on this, and I wonder why more people don't tend to use this bride. It sounds great, it functions nicely and it looks killer. The stock pickup in this wasn't my liking as it was a bit too bright, but the guitar sounded great unplugged, so I can't blame it too much for a bad pickup choice.
Did you find this review helpful?yesno
Cookies help us improve performance, enhance user experience and deliver our services. By using our services, you agree to our use of cookies. Find out more.