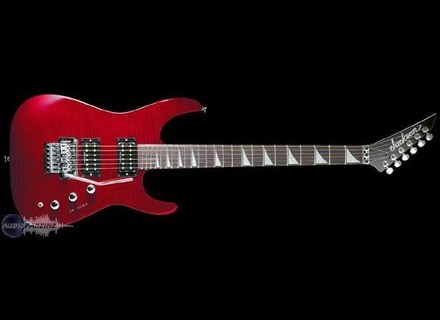 DX10D Dinky , STC-Shaped Guitar from Jackson in the X series.

View other reviews for this product:
This model is upgraded from the DX1, but it's still marketed towards beginners more than anything else, it seems. It's not nearly on par with some of the other guitars that Jackson makes, but considering the price, there's no way it could be. The guitar features an alder body with a maple veneer, a maple neck with a rosewood fretboard, 24 frets with reverse sharkfin inlays, a licensed floyd rose bridge, two humbuckers, one volume, one tone and a three way switch.

The flame top on this is actually a veneer. For those who don't know what a veneer is, it's a very thin piece of wood. Most higher quality flame tops are actual thick slabs of maple that contribute to the overall tone of the guitar. This one is solely for looks, and it doesn't contribute to tone in any way what so ever. It looks average, too. The bridge on this is a licensed floyd, and it's not that great. The metal isn't as nice as on some of the higher quality floyds out there, and it doesn't flutter as nicely. To make matters worse, the bar on this didn't fully fit properly inside the collar, so fluttering sounded really bad. The fretwork is pretty average considering the price, but once you compare it to some higher quality guitars, you'll realize that it's pretty subpar.

The pickups in this are Duncan Designed pickups, and they sound pretty bad. The bridge pickup is meant to be a copy of the JB or Distortion...or something. However, it's very flubby sounding overall, and it has some very harsh treble that doesn't seem to fully jive with the alder body. It's like what the JB would be if it were bad. It doesn't respond nicely to the tone knob, but i don't really use the tone knob that much, so no biggie there. The neck pickup always had some harsh treble going on, and I couldn't dial that out. On top of that, the low end was very loose once you started to add some high gain. These are pretty bottom of the barrel pcikups that have a very limited place in the market. If you can afford it, upgrade the pickups to something better.

The guitar needs to have a few upgrades before it can really be playable. Replace the floyd with a higher quality one, replace the pickups with better sounding ones and then get the frets leveled. Once you do that, if the body wood itself sounds good, you should be left with a good player at fairly minimal costs. However, I'd just buy a used higher end Japanese model and not have to worry about most of those issues. They're a bit better, I've found, and I think you'd agree if you tried them side by side.
Did you find this review helpful?yesno
Cookies help us improve performance, enhance user experience and deliver our services. By using our services, you agree to our use of cookies. Find out more.