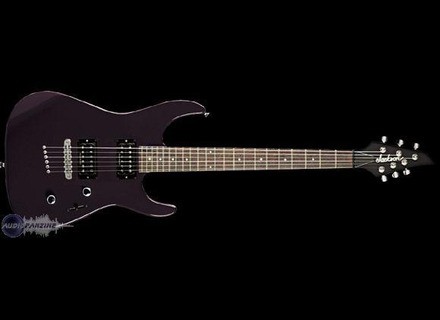 DX6 Dinky, STC-Shaped Guitar from Jackson in the X series.

This guitar is based off of the Dinky series, but it has a few changes than what you'd normally expect. While it has the Dinky body, it doesn't have the standard Jackson headstock that most have come to know and love (or hate). Instead, it has a 3x3 headstock similar to some of their other guitars that aren't nearly as popular. The guitar has an alder body, a maple neck with a rosewood fretboard, 22 frets with dot inlays, a hard tail bridge, two humbuckers, one volume, one tone and a three way switch.

The #1 thing I really hate about this guitar is the bridge. It was digging in my hand like crazy for whatever reason, and there was an issue with intonating it to where I wanted it. It could have been the strings as I didn't have enough time to do a full setup on this, but it just wasn't my cup of tea. The thing is, I'm more of a floyd player anyway, so this could be something you actually prefer (intonation issues aside). The frets on this were average and nothing to really brag about. The ends were cut sharp, but they didn't extend past the fretboard. The nut needed some work, and I would have preferred they chose a better material than what they did, but with some filing, it can work out fine.

The guitar had Seymour Duncan Designed pickups which are based off of popular Duncan models. I believe the bridge pickup is based off of either the famous JB or the Distortion. It kind of has a similar sound, but it's nowhere near as organic or responsive. The bridge pickup seems to be harsher and not as clear sounding as some of the real Duncans are, if that makes sense. The neck pickup is very similar. It has some strong treble, and if you lower the tone knob a bit, it can start to get fairly muddy sounding real quick. It doesn't have the note definition that the real ones do, and it's disappointing. If you're going to keep this guitar, replace the pickups with higher quality ones.

The guitar is still fairly stripped down, and the quality isn't quite there, in my opinion. Then again, it all depends on what you're looking for when it comes to guitars. If you're not a serious player or just want a beater guitar, then this guitar could be exactly what you're looking for. They don't make a ton of hard tails, so those of you who hate floyds might really dig this.
Did you find this review helpful?yesno
Cookies help us improve performance, enhance user experience and deliver our services. By using our services, you agree to our use of cookies. Find out more.