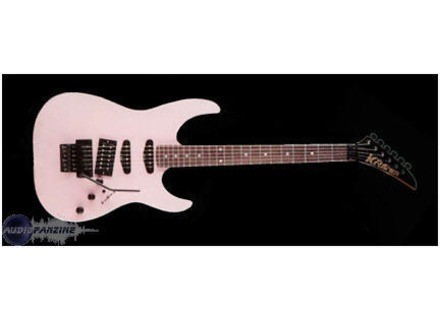 View other reviews for this product:
Kramer was known primarily in the 80s for a sleazy style guitar instrument. These guitars are basically super stratocasters in which I mean they have the Stratocaster body that Fender makes but they added a humbucker in the bridge position as well as a Floyd Rose or another tremolo system of some sort. These are the kind guitars that you would've seen 80s metal bands use and overall pretty much any person you play hard rock metal back in the 80s. This is the Japanese version of the Pacer custom guitar from Kramer. It was made over in Japan and for the price it gave the budget musician away of getting a super Stratocaster guitar at a more affordable price. Essentially this is the same guitar as a USA made pacers but it just didn't have that USA stamp on the side. There are every bit as high quality guitars as the US standard guitars.


This is a cool guitar if you're into the pointy headstock 80s shred guitars. This is an not for someone who is into indie rock or pop rock or anything like that. This is a for a hard rock or metal playing guitarist. It's a cool guitar into the price if you can find one there not that bad. I recommend this to anyone is looking for a court 80s guitar with a little bit of nostalgia.
Did you find this review helpful?yesno