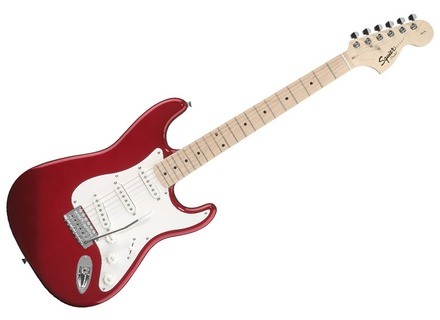 « An example of why Squier's inconsistent »
2

Buy this productView price information >
View other reviews for this product:
The Squier Affinity series Strat is designed by Fender and made overseas in China. It features an alder body, a maple neck with a rosewood fretboard, a CBS style large headstock, sealed tuners, a fulcrum point tremolo bridge, and a pickguard loaded with 3 ceramic single coils and a control layout of a volume control, two tone controls and a 5 way pickup selector switch. It comes in many different colours and is available with a maple or rosewood fretboard. They are often paired with a package that includes other beginner friendly items such as a bag, tuner, cable, picks, and a small practice amp.

This guitar really isn't anything to write home about. I've tried a few of them and they seem to vary from average to just downright awful. They're much heavier than I'd think they should be (probably due to using cheap alder for the bodies) and the necks are usually poorly finished with sharp fret ends. They're not all bad, but compared to the newer 2008 and up Bullets that I'm seeing, the Affinity Strat is laughably worse in quality.

Getting a decent sound out of this guitar is not really something that is particularly difficult, but you'd have to be playing through a decent amplifier. The stock Fender practice amps they include really are not great and don't bring out the most stellar tone

I've tried this guitar through the stock Fender practice amps as well as some nicer tube rigs. Unlike the Bullet, which I found to be great sounding and very Stratty, the Affinity just sounds like a bland and generally unappealing guitar. There isn't much variation in the tone of the pickups. It basically goes from very bassy to extremely bright and trebley with not much in between. The volume and tone controls really don't do much and act more like on/off switches than actual pots... something that is a pet peeve of mine. The clean tones are pretty much just a flat and standard sound... really nothing special. The drive tones are pretty uninspiring as well, though occasionally I can hear a HINT of that wonderful Strat tone lurking within... but unlike the new Bullets, these Affinities just don't do the Strat thing. Oh well.

All in all I don't really recommend this guitar due to how inconsistent they can be. The older ones I've seen seem to have really bad fretwork and finishing, with poor setups and even worse pickups. The newer models are improving... slowly, but it's still not really quite there. For the $180 or so that these sell for new, I would definitely look elsewhere. Maybe get yourself a Squier Bullet Tremolo for $100 or a Yamaha Pacifica 012 or 112... both are superior to this one.
Did you find this review helpful?yesno
Cookies help us improve performance, enhance user experience and deliver our services. By using our services, you agree to our use of cookies. Find out more.