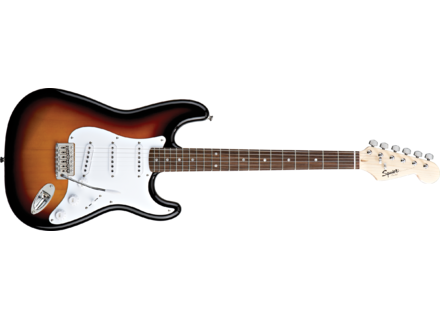 View other reviews for this product:
Ive played guitar for probably around 5years now, and ive also played quite a number if higher-end guitars. The "Bullet Strat" from Squire is probably one of the best that I have had my hands on (Literally) The pickups had a little noise to them, and i knew this going in, but i had a friend who had one identical to the one i bought (brown sunburst). He changed the pickups and it took care of the problem, although dumping an additional 100 bucks to the note I left it alone and played it "as is" and delt with it.

From the comfort in your hands to the smooth action, to the signature "Strat" sound, I believe this is a great guitar all around even though im still early in my guitar playing career.

sounds great, couldnt ask for more out of one of my first guitars!

Overall, if your looking for a guitar to start out on or to give to you kids this is the one. When i first got this guitar it use to buzz and pop really bad when you would touch anything metal. This was caused from lack of shielding. actually there was no shielding inside i opened it up and it was just bare wood. however with a roll of aluminum foil tape from the local hardware store and three hours later when i plugged it back in there was absolutely no buzz or pop at all except for when you touch the actual pickup slug itself. this now a amazing sounding guitar. my only complaint is that when turned to the bridge pickup it tends to get way too hot and can pickup sound coming out of the speaker and squeal. the selector probably should be replaced because of when selecting a single pickup (neck, middle, or bridge position) it tends to hum a little more then the other slots
Did you find this review helpful?yesno
Cookies help us improve performance, enhance user experience and deliver our services. By using our services, you agree to our use of cookies. Find out more.