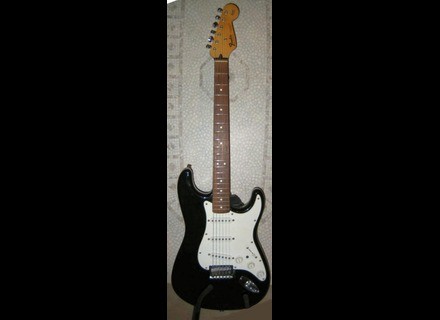 +
Squier Stratocaster (Made in Mexico)

View other reviews for this product:
Squier Stratocaster Made in Mexico
22 frets, with 21 boxes, 3 microphones simple (seeming deus magnetic strips with studs visible on the back of pickups and have to be Japanese), 5-way switch.
cehvalet standard vibrato,
buttons and settings on a standard strat
Channel end, maple, rosewood fingerboard

Handle very nice, fine, tpoche curved, thin frets and very solid, very easy access to acute, lightweight, fully distributed with the handle, there is not a thick layer of varnish as a Fender Stratocaster Squier Chinese or Mexican.
The sound is very good, lots of fishing, very accurate, the pickups are Japanese and the body a lot (I do not know what it is, apparently, alder?)

You can play everything on a Start (and anything for that matter, is the misicien playing ..!)
Tested with a Marshall 100w JMP2203. tube, with a Fender Vibrolux ... the sound is better than a fender Mexico ...
Micros very good, we lose nothing by lowering the volume ... rather bold, but light (the opposite of special Texas), its precise ave a lot of fishing.

I found in Germany, apparently, the Squier Mexico were not distributed in France? A really good strat (not a good old American perspective but we must), but it is a stratum of the same level as a JV Squier, or a good fender Japanese far better than a Fender Mexico.
The only downside, it is mechanical, they have not broken ... but the rest ...! I can not guarantee anything but it seems that these Squier were built with U.S. parts (and Japanese apparently), anyway, it's really a good strat but there are marked "Squier" above ... Squier only beginning to be seen to be good instruments are relatively small price Squier Japan, by the way, the JV and SQ are very good (and expensive) but the others are not bad either (but Finally, a squier standard will cost 300 euros new, for that price, it was a good Squier Japan, much better). So, in addition to Mexico ... I sold 250 euros, a bargain for those who bought it and did not hesitate in esseyant. If there had been written "Fender" on it, it would have cost twice as much, since its quality is better than a Mexican standard. Moral: do not rely on brands!
If I have rated it 10/10 for the price and even if it was more expensive. Apart from the mechanical, but there are 20 to 30 euros and it was a good strata that has nothing to envy to a Fender Mex, quite the contrary. PS there are still five years, a JV Squier 1500frs cost (200 euros), now it costs an average of 700, I'm sure it will be the same with the Squier Mexico ..!
See the source
Did you find this review helpful?yesno
Cookies help us improve performance, enhance user experience and deliver our services. By using our services, you agree to our use of cookies. Find out more.