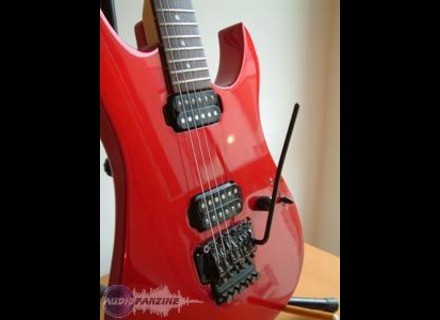 View other reviews for this product:
JAPAN manufacture according to standard (very upscale) guitars made at that time.
Micro are Di Marzio, Floyd bridge.

Handle excellent and very well balanced guitar. Primarily to cut the solos, the neck is not thick and fast: from Charvel and Fender I would say, even if not necessarily very explicit <img class="smiley" src="https://fr.audiofanzine.com/images/audiofanzine/interface/smileys/icon_mrgreen.gif" alt="mrgreen" />
The pickups are designated for the very large sound, rich in harmonics.
Enough anecdotal evidence for its clear, except for the rhythmic funk: scour!

I play with two bodies on HK, say it is made for gifted and styles ranging from rock to metal, forget blues / jazz or whatever, because it scratches incredibly loves to show off!
In short, impossible to be discreet! <img class="smiley" src="https://fr.audiofanzine.com/images/audiofanzine/interface/smileys/icon_wink.gif" alt="wink" />

Purchased 3 months ago, I did not acquire an instrument of such quality, I had relied on the advice of other friends, and I'm really not disappointed.
So we like it or not, but it's a guitar showman, is also the model "Blues Saraceno", so again, but no half measures ...
I own Charvel Japan (475 Deluxe and Predator) and a Godin Artisan and Hamer.
Well, that's something else ... <img class="smiley" src="https://fr.audiofanzine.com/images/audiofanzine/interface/smileys/icon_wink.gif" alt="wink" />

If you buy one, you will not make a mistake, it's a guitar that can be found at a reasonable price to 500 Euros, which greatly underestimates its qualities.
See the source
Did you find this review helpful?yesno
Cookies help us improve performance, enhance user experience and deliver our services. By using our services, you agree to our use of cookies. Find out more.