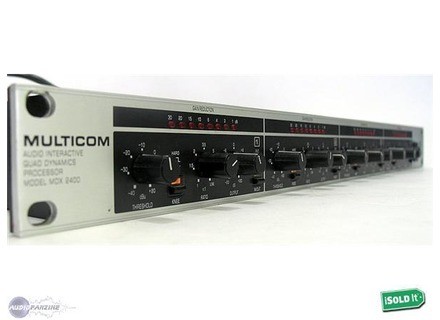 Multicom MDX2400, Studio compressor from Behringer in the MDX series.

VCA compressor, low-end system (that in 2159, carbon resistance ... Like all the compressors in this price range).
Classical connection jack / XLR.
Not much as setting: threshold / ratio / gain ... Point line.

Bought for editing!
I read I do not know where, and there I do not know how many years that the circuit of this model was quite changed. Basically it's not too bad thought but there are only the least expensive component.
4 channels for as many changes compared with A / B.
Ah yes I digress: "The general configuration is it simple?"
Well I say? With the number of available settings should not expect the precise ...
But it has the merit of being simple and practical ^ ^

This is where it gets fun!
I said from the outset: I replace the components by adapting the values ​​needs. I do not think back design, this level there is more rewarding projects.

So the original one is in the lower range of vac ==> other behringer, dbx first, I pass. Job done without taste.
Resistance / condo / aop changed: But is that the player becomes small! We do not control the attack and loosening is therefore at the mercy of the machine. Originally the attack is rather soft and I'm not talking about loosening, then it became pretty darn bright, almost aggressive!
To give you an image is on a fast attack, medium and loosening test on percussion transients are quite good.
Oh ratio finally makes its job!

So for the first tests: It is easy to pass a step above is not final but really funny.
Originally it was in the middle, it's okay changed almost good!

As we said earlier in the experiment.
I must find the time to do a few more tests: change vac, vac change and all the rest, comparison, find the bottleneck ...
Originally I did not know ... Maybe in a limiter setting for small PA and / or if you have that in hand ca ...
Modified ca troubleshoots well over a perceived no-brainer, like for bass.
So it is in my mini fly outside! The behringer it does not attract lust and then it does its job.
So for the overall opinion:
- Have you tried many other models? That is not the question
- What is the particular feature you like best? Changeable for little cost
- How would you rate the quality / price? € 40 OCCAZ to tinker, it's going!
- With experience, you do again this choice? It was a trick to test, thence resume ... There's frankly the most rewarding things.
See the source
Did you find this review helpful?yesno
Cookies help us improve performance, enhance user experience and deliver our services. By using our services, you agree to our use of cookies. Find out more.