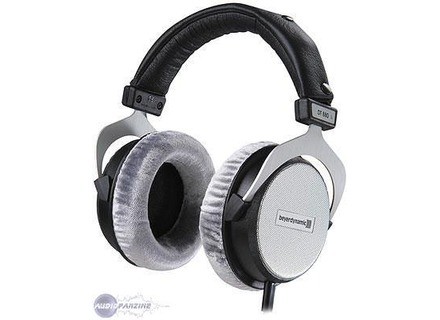 DT 880, Studio headphone from Beyerdynamic in the DT 880 series.

View other reviews for this product:
The BeyerDynamic DT 880's are a great pair of high end studio headphones. They're definitely best suited for studio and general listening use, but they're so good that they can be useful for use of any kind. The studio I work at just picked up a pair of these and I'm glad we've got them as they're really something special and are some of the best headphones I've used in a while. Beyond use in recording studios, they're also designed for hi-fi stereo listening purposes. They've got a semi open back, but block out enough sound that you shouldn't experience too much bleed with them for recording vocals. The DT 880's also come in a few different versions, as the ohmage varies between a few different models. We've also got a pair of DT 770's at the studio, which have a completely closed back. It's nice to have the option, but depending on what you're using them for I don't think it's going to make all the difference in the world. I really enjoy the well rounded sound of the DT 880's as they seem to cover as much ground as a pair of headphones could. It's like a sonic landscape when you put them on as they consume you with a clear picture of what you're listening to. They're also incredibly comfortable headphones as they're super soft, which is something that's usually lacking with headphones. To get the BeyerDynamic DT 880's it's going to cost you a pretty penny, but if you're after a set of hi fi headphones that you can use for a lifetime on a consistent basis, the DT 880's should be in the discussion without a doubt. While most won't be able to afford these, for those who can they're a real treat to have in any setup.
Did you find this review helpful?yesno